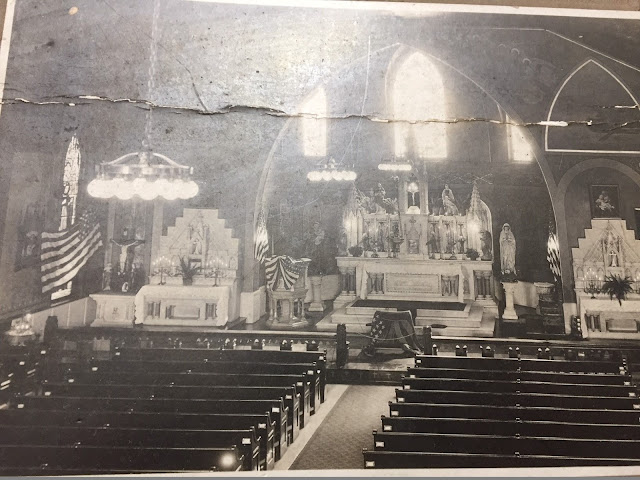 100 years ago today the guns finally fell silent on the Western Front, and the civilizational calamity that was World War I (“The Great War,” as it was then known) came to an end. On display in the church today (and all year long downstairs in the parish hall) is the famous photo of our own church as it looked on that memorable day, all decorated in celebration of the Armistice [Photo Above]. Of course, as we now know with the benefit of hindsight, that Armistice and the welcome relief it brought were but a temporary truce in what would prove to be almost a century of European and world war, sometimes hot, sometimes cold.

My first assignment as a priest was at a parish in Toronto. In Canada, as in other Commonwealth countries, November 11 is Remembrance Day and is universally observed with virtually everyone from the Queen on down wearing red poppies in the weeks leading up to it and with a strict 2-minute silence at 11:00 a.m. on the day itself, customs we unfortunately don’t have here in this country.  Even so, remembering is one of the things that especially makes us human. And it is above all as fellow human beings and also as fellow citizens that we remember today those who have gone before us, our cherished past to whom we owe our precious present and our hopes for the future. To remember those who have died is to acknowledge the importance of their lives and the common humanity which we share with them in life and in death. To remember the still-living veterans of the wars of the past century is to acknowledge what we owe to their commitment to our national community and the common citizenship we share and the hopes we have.

Remembering is also one of the things that especially makes us Christian. To remember those who have gone before us in faith, as we do especially during this remembrance month of November but also every day at every Mass, is to celebrate the multitude of ways in which the grace of God touched and transformed each one of them in life - and the hope we still share with them in death.


Like the soldiers who served on the Western Front 100 years ago, the widow in today’s Gospel [Mark 12:38-44] got no immediately obvious reward. The widow, however, contributed to the Temple out of her limited, meager means – revealing the generosity of her spirit and the seriousness of her commitment to what the Temple represented in her community.

In this era of low marginal tax rates, gated communities, health and fitness fixations, political and ideological tribalism, politicians' playing on people’s fears, and increasing incitements to angry behavior, perhaps few messages may seem more counter-culturally challenging than this gospel story of that nameless widow and our own national stories of service in far-away wars – which are all about being focused on something other than oneself and on one’s own individual needs, about not letting oneself and one’s all-important private world get in the way of one’s obligations to others and one’s connection with the larger human community.

Ours is a society in which reality is increasingly subjective, in which the Individual has become the center of meaning and value, reducing family, community, and society to at-best secondary realities. Even churches increasingly sometimes seem more like social or political clubs where like-minded or similarly situated individuals can feel good about themselves together. We are forever being tempted to privilege what is individual and private and personal over what is common and shared and bigger than ourselves. Today’s anniversary reminds us what it means to be connected with one another in a larger community, and what commitment to one another and such a community actually requires of us. Jesus’ words in today’s Gospel likewise challenge us all to rediscover what generosity and commitment actually mean.

Jesus’ words are a challenge that calls us beyond even the obligations of a common civic life together, but also a lifelong invitation to what we can hope to become - not just for now but forever.