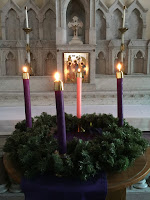 One of the most familiar liturgical and linguistic treasures of the classical Anglican Book of Common Prayer is the famous Advent Collect, recited annually on the First Sunday of Advent and then added to the daily collects every day until Christmas Eve:

Almighty God, give us grace that we may cast away the works of darkness, and put upon us the armour of light, now in the time of this mortal life, in which thy Son Jesus Christ came to visit us in great humility; that in the last day, when he shall come again in his glorious Majesty, to judge both the quick and the dead, we may rise to the life immortal; through him who liveth and reigneth with thee and the Holy Ghost, now and ever. Amen.

Until 1969, the Roman Rite expressed somewhat similar sentiments in the traditional Collect for the final Advent Mass on the morning of December 24 (here as translated in my old Saint Joseph Daily Missal):

O God, who gladden us by the annual expectation of our redemption, grant that we who now joyfully welcome Your Only-begotten Son as our Redeemer, may also, without fear, behold Him coming as our Judge, even the same Lord Jesus Christ Your Son, Who with You lives and reigns in the unity of the Holy Spirit, world without end. Amen.

Such prayers effectively express the spirit of the Advent season and help situate the worshiper in relation to Advent's serious but hopeful expectation, recalling Christ's first coming as motivation to prepare properly for his second and final advent.

In the United States, it is often said that Advent "doesn't work," the anticipation of Christmas having completely taken over the calendar. By that reasoning, Advent shouldn't "work" anywhere in our contemporary "globalized" world in which Santa Claus now reigns more or less everywhere and as likely as not assumes his throne even before the First Sunday of Advent. Yet, without defending our commercially-motivated rush to anticipate Christmas, that argument assumes too much of a conflict between Advent and Christmas.

The fact is that, in the post-Christian West and in the non-Christian anywhere else, there is inherently always a dissonance between the liturgical and secular calendars. Apart from residual days off from work in once-upon-a-time more religiously observant societies, what difference does it make any more to most people (churchgoers and non-churchgoers alike) whether it is Advent or Pentecost? (Even worse, for more and more people, what difference does it make any more whether it is Sunday or Monday?)

Of course, we would all be better off if the liturgical cycle still made more of an impact on people, if it still defined society's calendar as it once did in once Christian societies. But that is not our world. Instead, while we worship according to one calendar, we actually live the rest of our lives according to another.

The challenge is precisely to live meaningfully in the liturgical cycle of Sundays and seasons and saints' days while remaining engaged in secular society and its alternative time. And frankly one way to do that with regard to Advent is to reemphasize more the original eschatological sense of that season instead of treating it as some sort of religious Grinch- inspired alternative to the Christmas that is already taking place all around us.

In short, stop treating Advent (the liturgical experience) and the secular Christmas season as competitors. "Black Friday" is a capitalist abomination to be sure. But there remains much in the secular Christmas season that is genuinely positive - the joy, the festivity, the time with family and friends, the opportunities to reach out to others. Even Christmas shopping, within humane limits, can be a moral good, when one genuinely focuses on giving and not on acquisitiveness. Highlighting what is wholesome in the season is a universal human challenge which can be of benefit to all, whether or not they observe Advent, whether or not they practice any religion at all.

Meanwhile, let Advent be Advent. Let it be not some season of make-believe pretending Christ hasn't been born yet and waiting for him to be born on Christmas, but let it be what it was meant to be, a time of joyful expectation of what that already accomplished first Coming - now in the time of this mortal life, in which Jesus Christ came to visit us in great humility - actually means for our challenging present and our hoped-for future.