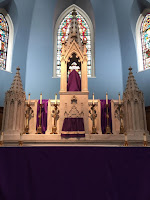 The crowd scene in this Sunday’s Gospel [John 8:1-11] recalls so many such scenes of mob violence and vigilante justice in many places and at many times. For example, it reminds me of what happened in certain places in Europe at the end of World War II, when mobs of people, just recently liberated from German occupation, took revenge on those who had collaborated with the enemy – in particular, women who had gotten involved with German soldiers. As often happens in such situations, however, sometimes it was actually personal or business rivalries or other old scores that were being settled in the guise of post-war revenge.

In this case, the mob’s motives for trying to involve Jesus are unclear, but the story suggests that it was an attempt to trap Jesus in some way. Was the mob trying to get Jesus to render a judgment without first giving the accused the hearing the Law entitled her to? Things like that happen, of course, all too often in human relations, especially in our scandal-driven, social-media age, when snap judgments are made immediately, while the real facts and complete context come later (if at all). Had Jesus gone along with judging her case without the hearing that the Law entitled her to have, then presumably Jesus would have been exposed in the process as something less than the prophet he was purported to be.

Of course, Jesus saw through all of this. Instead of playing the mob’s game, he himself cleverly took control of the situation – by silently writing on the ground with his finger. The power of silence! What a lesson for our noisy, opinion-driven, chattering society!  And what better way to silence problem people in any time or place than to appear to ignore them? What is more annoying to someone sputtering hateful tweets or otherwise trying to command one’s undivided attention than deliberately doing something else? Look at the wonderful example set several weeks ago by New Zealand’s Prime Minister's refusal ever even to say the name of the terrorist who massacred more than 50 people in a Christchurch mosque!

Jesus’ silence must have been exasperating to the mob, as it probably would be to any one of us too. Just think how frustrating it can be for any one of us when we have to interrupt our ordinary daily activities to try to get an answer out of someone but instead have to wait endlessly to obnoxious music or repeated announcements about how important our call is to them, when it obviously isn’t!

Jesus’ technique was effective. But even more effectively, when Jesus finally did say something, he totally turned the case completely around. The Law assigned the initiative in executing the sentence to the witnesses, but Jesus’ response forced them to judge themselves instead – in other words, to examine their own lives and to see themselves as God sees them. The result was quite dramatic, as they went away one by one, beginning with the elders.

Now it was the woman’s turn to wait, while her accusers slowly drifted away as Jesus continued to write on the ground. As Saint Augustine famously summarized the silent drama of the scene: only two were left, misery and mercy.

Finally, the silence ended. Jesus said to her: “Go, and from now on do not sin any more.” Like last week’s wonderful parable of the father and his two sons, this story is a dramatic demonstration of God’s way of dealing with us, so different from the way we deal with one another – and of what God really wants and expects from us in return.

When we honestly examine ourselves without excuses or evasions, when we look directly into our own lives and the depths of our own hearts, and so begin to see ourselves as God sees us, as sinners truly forgiven and invited to reconciliation, then - out of that overflowing experience of forgiveness received - real reconciliation with one another becomes an authentic possibility. More than a mere possibility, it becomes an imperative – for our own healing and for that of our wounded world.