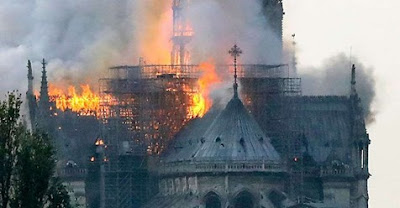 50 years ago, in the first episode of Kenneth Clark's monumental 1969 TV series Civilisation - https://www.youtube.com/watch?v=w6qYjisp51M&t=311s - Clark stood on the bank of the Seine River in Paris and asked, “What is civilisation?” Answering his own question, he then said "I can't define it in abstract terms, but I think I can recognize it when I see it.” As he did so, he turned to what was behind him across the River, the Cathedral of Notre Dame de Paris, and continued, “I’m looking at it right now.”

Begun in 1160, it was basically completed by the mid-13th century and has long been recognized as one of the great Gothic masterpieces. It has been inseparably linked with the identity and history of France, "the eldest daughter of the Church." The trials and tribulations of the French Church have been hers. In 1548, Huguenots destroyed some statues. It was more thoroughly desecrated by the French Revolution, which rededicated it to "Reason" in 1793 and then turned it into a warehouse. Napoleon restored its religious, Catholic character and then in 1804 crowned himself Emperor there. General Charles De Gaulle attended a triumphant Te Deum there on August 26, 1944, to give thanks for the liberation of Paris from the Germans (even while sporadic gun shots rang out, both outside and within the great cathedral).

It is no accident that distances within France are marked from kilometre zéro at Notre Dame.

Last night's fire was yet another tragic blow to that sacred place, as well as an incalculable blow to our Western cultural heritage. Our post-modern, secular society aptly expresses its spiritual emptiness and its inhuman ugliness in its soul-destroying inhumane ugly buildings, reflecting the diminished character of contemporary human aspiration. The age of the great cathedrals was limited and imperfect in many ways, but at least it directed human hearts and minds to look upward as opposed to our contemporary preoccupation primarily with our petty selves.

Although the monumental (19th-century) wooden spire completely collapsed, fortunately the familiar bell towers and much of the fabric have survived, a true tribute to the inherent wisdom in gothic architecture. Also the relic of the Crown of Thorns has been saved. There is still a church, however damaged, on that historic site. And, God willing, the world will somehow bestir itself to rebuild this treasure of our past and of our hopes for the future.