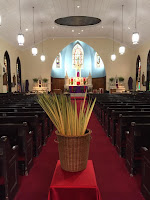 Almost 50 years ago, in August 1969, I visited a church for Mass. While waiting I read something I picked up in the pamphlet rack in the vestibule. It was an article about the new liturgy, full of radical suggestions. One proposal was that the Palm Sunday procession should be abolished because it obviously made no sense to modern people, who after all don't do such things. To me it seemed rather that it was the author that was obviously out of touch with popular sentiment, because, of course, that very week thousands of people had turned out for a ticker-tape parade to honor the Apollo 11 Astronauts who had landed on the moon the month before.

Not quite another ticker-tape parade, but, roughly half-way between then and now, when I was studying in Israel in 1993, I  visited a village in Samaria for the 1st Mass of a newly ordained local priest. Everyone gathered at the village boundary, around an arch of palm branches and balloons, waiting there for the new priest to enter his hometown. As the procession began and all the villagers started shouting and waving palms in the air, my host said to me: now you see what Palm Sunday looked like!

The Gospel read at the beginning of this Sunday’s Mass recalls Jesus’ journey to Jerusalem for the Passover holiday and his triumphal entry – minus the balloons but still full of messianic symbolism – into the Holy City.  We commemorate that event today with our own triumphal palm procession - again minus the balloons, but waving palms, and singing that wonderful 9th-century hymn that Theodulph, the Bishop of Orleans, composed for this very occasion around the year 810. (He composed 39 verses, which tells us something about the distance covered by such processions in those glorious days!)

The rest of the story [Luke 22:14-23:56], which we have just heard, reveals the ultimate destination of that journey – to the cross and the tomb. We, of course, are the prime beneficiaries of this. It all happened, as we say every Sunday in the Creed, for us and for our salvation.

So it is no accident that the cross in the central symbol of Christianity, because the cross of Jesus is precisely where we meet God in our world, just as the tomb – the eventually empty tomb – shows us where he is taking us.

In a world where oppression and injustice, and suffering and death always seem to have the last word, the Passion of Jesus was God’s great act of solidarity with us and our world, as well as an example of how to respond.

For every word Jesus utters in his passion shows him reaching out to others – to the women of Jerusalem, to his executioners, to the convict being executed along with him – finally commending himself once and for all to his Father.

And so this week - this week we call Holy Week - we are invited to accompany Jesus to the cross and to the tomb
- to be consoled as were the women of Jerusalem,
- to be forgiven as were his executioners,
- to be remembered in his kingdom as was his fellow convict,
- and, finally, to be commended to his Father with whom he now lives forever,
- and with whom we too can now hope to live,
- because, thanks to Jesus’ cross, oppression and injustice, and suffering and death no longer have the last word in our world.