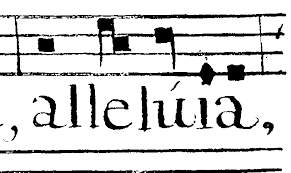 As many of you may know, this year the Paulist Fathers are celebrating the bicentennial of the birth of our founder, Servant of God Isaac Hecker. It was on Easter Sunday, April 16, 1843, a year before he became a Catholic, that the 22-year old Hecker attended a Catholic Mass for the first time. In his Diary, he wrote how he found the experience “impressively affecting.” He was especially struck by how the priest pointed, while he was preaching, to a painting of Christ’s rising from the tomb “with a few touching remarks turning all eyes towards it which made his remarks doubly affective.”

Here too in our church throughout the entire Easter season, along with the Paschal Candle, the ritual reminder of the Risen Christ’s great victory, is displayed is a famous image of the Resurrection, which portrays the Risen Christ standing over the broken gates of hell, lifting up from their coffins Adam and Eve and, through them, the entire human race they symbolize.

It is a wonderful image. But, of course, as we all know, no one actually saw the resurrection. Instead, we are told, on the first day of the week. Mary of Magdala came to the tomb early in the morning while it was still dark, and saw the stone removed from the tomb. In the normal course of events, the Sabbath day of rest should have been followed in the morning on the first day of the week by business as usual – both for the living, who would go back to their regular daily work, and even more so for the dead, decaying in their graves, who (then as now) were expected to stay dead. Presumably, those who went to visit Jesus’ tomb also started out with similar expectations. John’s Gospel only mentions Mary Magdalene. The other Gospel writers, however, tell us that Mary was accompanied by other women as well, and that their purpose in visiting the tomb was to anoint Jesus’ dead body. Instead, they found something surprising and unexpected. For that day – and every day since – the world has awakened not to business as usual, but to something totally new.

Easter invites us to put ourselves into the picture with Mary Magdalene, and the other women, and then with Peter, and all those disciples unexpectedly experiencing something surprisingly new in a world where everything else seems so ordinary and old. Of all the things that God has ever done, this was the greatest of them all. And so we say today: This is the day the Lord has made! Let us rejoice and be glad!

And yet, as we just heard, the first few to be made aware of this momentous news saw nothing but an empty tomb. Which left them maybe more confused than elated: For they did not yet understand the Scripture that he had to rise from the dead.

Nor would we, if that were all we had of the story.

Jesus’ resurrection was the most important event in all of human history – more important even than the latest presidential tweet or the latest person to leave his or her White House job or the latest candidate to compete for our attention. And yet, however hard it may be for us to imagine in this age of social media and 24-hour news, the world hardly noticed the resurrection at first. In a world which seems permanently stuck in the dark, pre-dawn position, the disciples first needed to experience the kind of change that could come only from the Risen Lord’s living presence among them.

And so do we, which is why we are here, where the Risen Lord brings us together as no one else can.

Christ is alive! We need to keep reminding ourselves of this, because we can risk seeing Jesus Christ simply as a fine model from the distant past, as a memory... But that would be of no use to us: it would leave us unchanged, it would not set us free. The one who fills us with his grace, the one who liberates us, transforms us, heals and consoles us is someone fully alive. … Alive, he can be present in your life at every moment ... Because he did not only come in the past, but he comes to you today and every day, inviting you to set out towards ever new horizons.

And that is why we are here this morning, peering into the open door of the empty tomb, where nothing is anymore as it seemed before. And that is why we have to keep coming back, Sunday after Sunday, year after year, to be filled in on what happened next and thus experience the effects of the resurrection for ourselves.

That is why every day for the next seven weeks, the Church retells the story of the early Church in the Acts of the Apostles - the story of those who first experienced the reality of the resurrection and its power to change the world, starting with changing them.

Really important things are remembered for their long-term impact, not for the short-term noise they make. Although no one actually saw or heard the resurrection, what we do see and hear are the resurrection’s effects – first of all on the disciples, and then on the world, and finally on us.

The resurrection’s effects on the disciples are what we see and hear in the gospel stories of their visits to the empty tomb and then later of the appearances of the risen Lord – and still later in the preaching of Saint Peter and others in the Acts of the Apostles and in the amazing response of those who heard their preaching, and finally in the testimony and letters of Saint Paul, who wasn’t there at all at Easter, but who himself eventually experienced the risen Lord and was forever changed as a result.

Its effects on the world were soon evident in the enthusiastic response of Jews and pagans alike to the amazing story the apostles told. In the long term, its effects have been equally dramatic in how the story has spread and the Church has grown as a result, in the dynamism that is at the heart of the Church’s existence in the world and that has propelled it outward in almost 2000 years of world-transforming activity.

Finally, its effects are evident in us, transformed in mind and changed in heart, by the unique power of this utterly unexpected event, which has glorified the humanity Jesus shares with each of us, and which has brought us together in a way in which nothing else could have, empowering us not so much with new knowledge as with a new hope.

It is the resurrection’s effects which we actually experience and which bring us here today – as Jesus’ body that lived and died and still forever bears the marks of his passion emerges from the tomb to transform our world, starting right here, right now, with us. So it is no wonder we like to ring all the church bells at Easter! How else will the world hear this story? And hear it the world must, for everyone’s sake! To tell the world that Jesus is really alive is the first and most fundamental task we have been entrusted with. That’s what the Church is for – commissioned to preach to the people and testify (as Peter proclaimed in the reading we just heard from the Acts of the Apostles) that Jesus is really risen from the dead and that everyone who believes in him will receive forgiveness of sins through his name.

Now the Church obviously isn’t just myself and the deacon here. The Church is all of us. And obviously we are not all the same. Some of us run fast, like the disciple whom Jesus loved. Others, beset by doubts or daily difficulties, run much more slowly, like Peter – Peter, whom Jesus nonetheless chose to be his Church’s principal spokesman. But, whether we are runners or walkers, what matters most, the Gospel story seems to suggest, is that we are here. Whether runners or walkers, we too have come to that tomb that was supposed to stay forever closed and dark, but from which the stone has been removed, in order that we - and the world – may look inside, may see, and believe, and be changed by the experience.

Peter's prominence in the post-resurrection appearance accounts highlights how what was happening there continues to happen in the everyday life of the Church, as the Risen Lord continues to reveal himself to his people through the experience we share by baptism as members of the uniquely new community that is the Church, brought into being and animated by the Risen Lord's parting gift of the Holy Spirit. The promises of Holy Baptism, which we will now solemnly renew are our solemn and collective commitment together to keep living this Easter story, to be excited by it, and to stay excited about it, so that the world can experience that something really new has happened - the new life we share with Christ our Risen Lord.