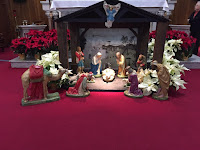 Entering our church today, you will have noticed an alteration in our nativity scene. The shepherds have been joined today by the magi. (In the actual story, of course, the shepherds came and went the same day and so were long gone by the time the magi arrived on the scene.)

In his recent Apostolic letter “On the Meaning and Importance of the Nativity Scene,” Pope Francis summarized the significance of the story of the magi: The Magi teach us that people can come to Christ by a very long route. Men of wealth, sages from afar, athirst for the infinite, they set out on the long and perilous journey that would lead them to Bethlehem (cf. Mt 2:1-12). Great joy comes over them in the presence of the Infant King. They are not scandalized by the poor surroundings, but immediately fall to their knees to worship him. Kneeling before him, they understand that the God who with sovereign wisdom guides the course of the stars also guides the course of history, casting down the mighty and raising up the lowly. Upon their return home, they would certainly have told others of this amazing encounter with the Messiah, thus initiating the spread of the Gospel among the nations.

The title “magi” suggests that they were wise, learned men, probably from Persia, perhaps astrologers. Beyond that, however, we really know next to nothing at all about the magi themselves – not their names (although tradition has given them the familiar names Caspar, Melchior, and Balthasar), nor their exact social status (though tradition, inspired in this case by Psalm 72, has crowned them as kings), nor even their number (though tradition, based on the gifts itemized in the Gospel, has counted them as three, which in time came to represent the three then-known continents - Africa, Asia, and Europe - and the three ages of human life – youth, maturity, and old age).

We may be very curious about such things, but Matthew’s Gospel tells us none of these things. It does, however, tell us what it is important for us to know about the magi.

First of all, it tells us that they were foreigners, Gentiles, pagans. They represent the majority of the human race – past and present – where (as we just heard from the Prophet Isaiah) darkness covers the earth, and thick clouds cover the peoples [Isaiah 60:2]. In other words, the magi had only human, natural knowledge, and sought, as Saint Paul said in his famous speech to a pagan audience in Athens, the God who made the world and all that is in it and gives life and breath to everyone [Acts 17:24-25].  Natural knowledge, human knowledge, scientific knowledge may be limited, but it is real knowledge. We moderns would do well to re-learn the ancient lesson that there is a lot to be learned from the world.

That said, the Epiphany story also tells us that, whatever varied paths different people may start out on, for the full story our paths must all finally converge in Jesus, the one and only Savior of the world. And the interpretive key to Jesus’ story is God’s revelation of himself not in nature but in the history of Israel.

Thus, it was to Jerusalem that the magi came to learn the full significance of the star – a meaning revealed in the Jewish scriptures, where Isaiah had prophesied, Nations shall walk by Jerusalem’s light, and kings by her shining radiance [Isaiah 60:3].

In today’s troubled world, in which anti-semitism is increasing both in our own country and around the world, we would do well to remember Christianity’s origin in Judaism and the special bond that has created. The Church, as the Second Vatican Council reminded us, cannot forget that she received the revelation of the Old Testament through the people with whom God in His inexpressible mercy concluded the Ancient Covenant. … [and] the Church, mindful of the patrimony she shares with the Jews … decries hatred, persecutions, displays of anti-Semitism, directed against Jews at any time and by anyone. [Nostra aetate, 4]

By way of warning, however, this story also illustrates how easily we may miss the point, thanks to misplaced priorities and the pursuit of religious and political power. When Herod heard the Magi, he was greatly troubled and all Jerusalem with him. They were troubled not overjoyed like the Magi! What troubled them? What made such good news seem to them like bad news?

Then as now, the same Christmas star that filled the magi with hope somehow seemed like an evil portent to those who somehow sensed the threatening challenge it posed to their power and priorities.

And then there were the chief priests and scribes whom Herod consulted. They correctly quoted the scripture, but they didn’t get it either. So none of them did the obvious thing – go to Bethlehem and do Jesus homage. Only the magi did!

And another warning of what happens when supposedly religious people put their trust in tyrants, when they ally themselves with unworthy political rulers in order to acquire or retain religious or political power or influence in society. Not for nothing does Psalm 146 warn: Put not your trust in princes. Then as now, supposedly religious people, like those Jerusalem chief priests and scribes allied with Herod, presumably knew the words of that psalm, but they totally and tragically missed its point! They remind me of something Reinhold Niebuhr noted half a century ago about clergy who got too close to unworthy political leaders: "It is wonderful what a simple White House invitation will do to dull the critical faculties," he wrote.

The magi, on the other hand, were overjoyed, not troubled. “The Christian life,” Thomas Merton once wrote [March 3, 1950] “is a continual discovery of Christ in new and unexpected places.”

The magi set out as authentic pilgrims and so found what they were seeking – and on entering the house they saw the child with Mary his mother … prostrated themselves and did him homage, the homage due to a true king.

In the traditional Roman liturgy, for centuries when these words were read or sung in the Gospel everyone was required to genuflect. It was the liturgy’s way of physically bringing the point of the story home, helping us to identify personally with the pilgrim magi.

As for the magi, we never hear anything about them again. We know only that they departed for their country by another way. As I suggested earlier, nativity scenes sometimes seem, so to speak, frozen in time. Everybody stays stationary – at least until it’s time to put the figures all back in the closet.

But the real magi didn’t just stay put in Bethlehem, any more than the earlier arriving shepherds did. Instead they went back to wherever they had lived before, but they departed for their country by another way. They went back to whatever they had been doing before; but, thanks to what they had experienced, they would never be the same again.

And, thanks to Christ’s coming into our world, we like the magi must also be different now from whatever we would otherwise have been.

Every January, after the holidays, we return, as we inevitably must, to our ordinary activities – at home, at school, at work, whatever and wherever. Like the magi, however, our challenge is to travel through our ordinary life by another way, because something so special has happened that makes everything different from what it would otherwise have been.

Long before there were funeral homes to print parish calendars, Epiphany became the annual date which the Roman Liturgy assigned to announce the date of Easter and other important dates in the coming year, thus putting the entire year and all of human time in its proper perspective.

None of us, of course, can even begin to foresee what this new Year of Our Lord 2020 will bring, whether for better or for worse. Yet, even as we navigate our way through an uncertain and challenging present, the Christmas star invites us to travel with the magi – to go on pilgrimage with then to Bethlehem and back again – confident that, whatever else may be the case, the Christmas star will precede us to illuminate every new day of this new year, and so will guide us, first, to Christ, and, then, thanks to Christ, on that new way, which, like the magi, we are, all of us together, being invited to find and to follow.

Homily for the Epiphany of the Lord, Immaculate Conception Church, Knoxville TN, January 5, 2020.