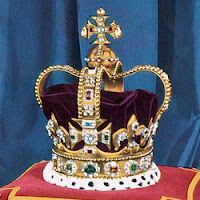 In modern monarchies, the principal expectation of princes and princesses, it has been said, is that they look good and behave well. The latter can be a challenge - especially since it is a life-long expectation which, under modern conditions, must be lived out under intense media scrutiny and without the supportive social consensus which behaving well once enjoyed.

The older system, in which a Royal Highness was expected (virtually required) to marry another Royal Highness (or, more daringly, at least a Serene Highness) had the obvious advantage that royal spouses knew from the start what was expected of them and so were as prepared as one could be expected to be to fulfill those expectations. That system is effectively gone; and princes and princesses are now expected to make more modern, more romantic marriages with all sorts of otherwise non-royal persons (provided, of course, the government gives its consent).

In the case of Britain's House of Windsor, the late Queen Mother Elizabeth was a non-royal person who proved to be a great asset to the family and (after unexpectedly becoming Queen) to her country. Her daughter, Queen Elizabeth II, made a more conventional marriage to a royal prince to whom she was already related. After her, however, British royal marriages have followed the modern taste, with manifestly mixed results. Fortunately, the next two Queens-in-waiting - Camilla, Duchess of Cornwall, and Catherine, Duchess of Cambridge - seem to have gotten the role right. Others, however, have been less successful, as recent history has highlighted.

Like Diana, the late Princess of Wales, and Sara, the Duchess of York (to cite the most obvious recent examples), Meghan, the Duchess of Sussex, at least initially endeared herself to the public and the press. But, as these and other examples sadly illustrate, behaving well is a lifelong challenge which not everyone is always up to, especially given the capriciousness of contemporary media scrutiny, which is as eager to cast down and destroy those it initially lifts up and inflates.

There are two intertwined tragedies in this sad story. The first is personal. It is hard (not impossible but increasingly difficult) for a modern person, socialized in expectations of personal autonomy, to embrace and adapt to a vocation of lifelong duty to one's country (or any other comparably higher value). Everyone needs some space to be him/herself - the very thing that our intrusive modern media (and the celebrity culture it has created) make so problematic.

The public tragedy, however, is that the very thing that our contemporary culture makes so difficult has never been more needed. Not that long ago, those who embraced a vocation of dutiful service and commitment were doing something that the rest of society still understood and somewhat respected. Now, however, the total descent of our society into a slough of individual autonomy, personal self-realization, and moral libertarianism has made such old-fashioned notions as duty, service, and commitment increasingly incomprehensible. Yet, of course, it is, if anything, precisely that regrettable reality which makes the contrary vocational witness so necessary. Never have the witness of duty, service, and commitment been more needed than now when almost everything about our society and the values our society promotes have become contrary to that witness and in need of correction by it.
Posted by City Father