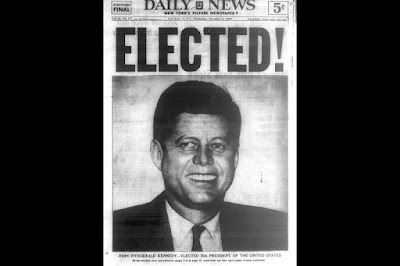 When I was in school, Election Day was always a holiday. Of course, not everyone had the day off, but my father did. And schools were closed, obviously, since they were the main polling places. Sixty years ago, I spent part of Election Day 1960 walking through the park with my father. Where we were headed or why, I have no memory. But I do clearly remember walking through the park with my father that crisp autumn day and talking a little about the election. The Kennedy-Nixon contest was the first presidential campaign in which I took any active interest. Kennedy himself had made a campaign speech a few blocks from our home. (In those days, New York was the largest state, with the most electoral votes, which could go either way, what we would nowadays call a "swing state.") The blue-collar character of the neighborhood and our common Catholic faith gave Kennedy and the Democrats a decisive edge in my neighborhood. But even there, both candidates had significant support. The outcome was far from certain when my father and I calmly walked through the park. Nor was it yet certain when I went to bed that night.

It was actually at 5:35 the next morning, according to Theodore H. White's famous account (The Making of the President 1960), that the Director of the Secret Service, watching in Washington, DC, noted that TV was awarding Michigan's electoral votes to Kennedy, enough to make him the president-elect. Minutes later, he telephoned the waiting Secret Service detail to establish security at the Kennedy compound in Hyannis Port, MA. It was, in White's words, "what little official ceremony election night offered." A little later, I awakened to see Kennedy's picture on the cover of The NY Daily News on the news stand below our apartment's window (photo). The News had endorsed Nixon, but its post-election editorial praised the outcome for dropping what it poetically called a 'hydrogen bomb" on the tradition that a Catholic could not be elected president.

The 1960 election had the highest voter turnout of any election in my lifetime - 62.8% (the highest since 1908's 65.4%, and way higher than 2016's mere 55.5%). Growing up, I watched my parents and other adults vote and wished that I too could go behind that curtain and move those little levers on the voting machine and so register my preference for who should be in charge. I wanted it enough that in 1969 I symbolically celebrated reaching voting age by registering to vote on my 21st birthday. Laziness, the challenge of voting absentee while living in a foreign country, and indifference as a new resident to local contests occasionally caused me not to vote. Yet the larger lesson impressed on me at home and in school - that voting is a civic obligation, part of what it means to be a citizen, and that it is a precious opportunity earned for me by previous generations - generally has prevailed, and I have voted most of the time, even in those elections when I  fully expected my preferred candidate to lose.

So I have always been somewhat appalled both by the self-righteous virtue-signaling of third-party voters and by the socially and culturally corrosive cynicism of those who do not value the responsibilities of citizenship enough to vote at all, or who foolishly think that not voting somehow "sends a message." The only message it sends is that those who already have power can confidently continue to ignore the interests of those who don't vote and so hold onto their power unaccountable to citizens - in other words, an oligarchy. That our present system so increasingly resembles an oligarchy is in part a reflection of our notoriously low voter turnout. In contrast, other ostensible democracies all have higher voter turnouts. Not coincidentally, those other ostensible democracies encourage - even in some cases mandate - voting.

As everyone knows, the 1960 election was extremely close. Kennedy won 49.7% of the popular vote to Nixon's 49.6%. (It was 303 to 219 in the Electoral College.) Yet, like Election Day itself, the aftermath was largely calm. Some were elated, some disappointed, but no one thought that the Republic was in danger. No one worried about an imminent apocalypse. Nor would those reactions have been different if Nixon had been elected. We were a very different kind of country then - less intense about our disagreements, more conscious of what we had in common.

Nixon had run on experience and continuity. Kennedy, although only four years younger than Nixon and equally part of the same "Greatest Generation," projected novelty and what Theodore White called "a sense of purpose." Kennedy, White wrote, "spoke to a peaceful and prosperous people in the year 1960, a people for whom the crises of swelling problems lay still unclear years ahead. He insisted that they must move to meet those obscure crises—which he did not define—and urged them to give into his untested hands the greatest of all crises, war and peace, without ever telling them how he meant to meet it. It was on this above all that he won—a sense of purpose."

For all that, the sense was still one of continuity. The two 40-something World War II vets who competed for the presidency shared a common worldview, forged from the firestorm of global war, and widely shared by the World War II generation they represented. The consensus was considerable. My father and my father's boss, who lived on Fifth Avenue, obviously lived very differently; but my guess is that their basic outlook on life and their values were more similar than different.

How different the country and the candidates this contentious Election Day! The two septuagenarian pre-Boomers running this year were part of that "peaceful and prosperous people" Kennedy and Nixon both spoke to in 1960. They were formed by that peace and prosperity, and,  in wildly different, quite contrasting ways, both look back to that era, even as the torch is passing again to a waiting post-boomer generation that has known neither peace nor prosperity.

Very much a man of his generation, Kennedy's Catholicism, which caused so much angst among American Protestants, was actually very matter-of-fact. It was part of who he was, his history and heritage, but peripheral to what he proposed to be and do as president.  Kennedy, who never set foot in a Catholic school, saw nuns as his supporters. Biden, this year's Catholic candidate, experienced them as his teachers.  Pre-boomer Biden, who in generational terms has had to define both the man he is and the president he would be through those "still unclear years ahead," wears his religious identity much more comfortably, as an accessible consolation in a new era when politics seems bereft of any sense of purpose but when we increasingly turn to politics for the consolation of identity the world once sought in religion.