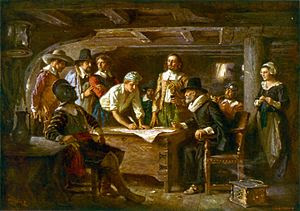 400 years ago today, 41 adult male passengers on the sailing ship Mayflower, anchored off Cape Cod, signed what history has since named the Mayflower Compact, a formal legal agreement binding its signers to maintain order and establish a civil society in the territory where they were about to settle. In my day, this was sometimes presented as a rare empirical example of a Lockean, second stage "social contract," in which already socialized individuals freely form themselves into a political society. Indeed, in 1802 John Quincy Adams (son of the 2nd President and himself later the 6th President of the United States)  called it "the only instance in human history of that positive, original, social compact." Insofar as our country can claim multiple "founding" moments, Cape Cod 1620 was another one of them.

Of course, the Pilgrims were not leaving a "state of nature." They already lived in society and, in fact, thought of themselves as already citizens of an existing political community, as subjects of King James I of England and VI of Scotland. They were, however, outside the physical boundaries of those kingdoms, outside the physical territory they had been authorized to settle; and so, pending a new royal "patent" to settle there, they believed they needed to establish an agreement among themselves to organize their common life as a settler community - to "Covenant and Combine ourselves together in a civil body Politic."

This is what they actually covenanted and combined themselves together to do:

In the name of God, Amen. We whose names are underwritten, the loyal subjects of our dread Sovereign Lord King James, by the Grace of God of Great Britain, France, and Ireland King, Defender of the Faith, etc. Having undertaken for the Glory of God and advancement of the Christian Faith and Honour of our King and Country, a Voyage to plant the First Colony in the Northern Parts of Virginia, do by these presents solemnly and mutually in the presence of God and one of another, Covenant and Combine ourselves together in a Civil Body Politic, for our better ordering and preservation and furtherance of the ends aforesaid; and by virtue hereof to enact, constitute and frame such just and equal Laws, Ordinances, Acts, Constitutions and Offices from time to time, as shall be thought most meet and convenient for the general good of the Colony, unto which we promise all due submission and obedience. In witness whereof we have hereunder subscribed our names at Cape Cod, the 11th of November, in the year of the reign of our Sovereign Lord King James, of England, France and Ireland the eighteenth, and of Scotland the fifty-fourth. Anno Domini 1620.

Historians and others can argue about the precise significance of this "social contract." Symbolically, however, it does express something of the American self-understanding of what it means to be a free people, whose freedom is made possible and protected precisely by a system of law. As we Americans approach the end of a period of notorious lawlessness at the highest levels, we as a society would do well to relearn the lessons our predecessors knew so well about the "guardrails," as they are commonly now called, that are so essential to who we are and who we hope to be.