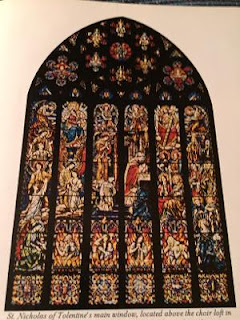 This past June was the 55th anniversary of my high school graduation. When 2020 began I was hoping for another reunion. Whether or not there would otherwise have been one, the pandemic took care of that. Our last one was for our 50th five years ago. 50 years is a long time! Thank God for nametags, or I might not have recognized most of those there! I envy those of you Knoxville Catholic grads who still see each other regularly!

It really has been a long time since my classmates and I last left our high school – and, for most of us, each other - behind.  The High School itself closed in 1991. Built as an expression of American post-war prosperity and confidence, as well as the zeal and enthusiasm of the mid-century American Catholic Church, its closure was a casualty of the loss of so much of that zeal and enthusiasm, rooted in a collapse of our cultural confidence.

Our reunion, however, was not an occasion for such somber thoughts. Rather it was a celebration of one another and of the memories we share from a world long gone. Because ours was very much a neighborhood school, many of us enjoyed a connectedness with one another and with one another's families that preceded high school and in some cases perdured.  Meanwhile, we have all gone our various separate ways, along the paths life has taken us.

As for those classmates who are no longer with us, whose earthly labors have already ended, may they rest in peace, and may we all come together again at the greatest reunion of all in the kingdom of heaven!

It is that great reunion which today’s 1st Reading [Revelation 7:2-4, 9-14] portrays and today’s solemnity of All Saints’ Day celebrates.

In November 1887, the Paulist Fathers’ founder, Servant of God Isaac Hecker, wrote in the Paulist magazine, The Catholic World: “When, in 1843, I first read in the catechism of the Council of Trent the doctrine of the communion of saints, it went right home. It alone was to me a heavier weight on the Catholic side of the scales than the best historical argument which could be presented.”

For one thing, church would certainly be a duller place! Just look around! Over there is the martyr Saint George in his knightly armor ready to slay a dragon for Jesus. Across the aisle is another ancient martyr, the Egyptian philosopher Saint Catherine of Alexandria.  At this end stands Saint Bridget, a 14th-century Swedish princess, a mystic who is now co-patroness of Europe, a wife and mother of 8 children who became a nun and founded an order of nuns (who nowadays even have an Anglican branch). Across the way is Saint Teresa, another mystic and religious founder, and a Doctor of the Church. Farther down this side stands Saint Patrick the great missionary Bishop and Apostle of Ireland, who obeyed Jesus’ command to go and make disciples, even if that meant going beyond the boundaries of the Roman Empire. And across the aisle is another bishop, whose name we don’t even know. My guess is that the glass with his name must have been broken at some point and was replaced with plain glass, rendering him forever anonymous – a fitting surrogate for all those saints we especially remember today whose names are known to God alone.

The communion of saints transcends time, uniting past and present. It permeates the Church’s worship and punctuates the calendar, culminating in this great annual celebration in honor of all the Saints – not just those officially recognized by the Church, but all the holy men and women, known and unknown, who have already attained the goal for which we still strive. Living now with God and praising him forever in heaven, the saints intercede for us, uniting their prayers with ours, imitating Jesus, our Risen Lord who lives forever to intercede for us [Hebrews 7:24-25]. Our celebration of the saints signifies our communion with the triumphant Church in heaven, and reminds us of the Church’s mission to mirror (however imperfectly) that heavenly community of angels and saints, and so transform the world - with love and forgiveness - according to the hope that is Christ’s great gift to his Church and the Church’s gift to the world.

As one of the seasonal turning points in the ancient northern European calendar, November 1 was the beginning not only of winter but of a new year, the eve of which was a frightening in-between time when the spirits of the dead were thought to roam about and try to haunt their old homes.  The celebration of all the Saints on November 1 represented the Christianization of that old seasonal holiday - a celebration of Christianity’s triumph over paganism and of Christ’s victory (as exemplified in the saints) over the demonic forces, which had hitherto held people in fear.

Remembering is a uniquely and fundamentally human activity. To remember those who have died is to acknowledge the importance of their lives - and the common humanity we share with them. To remember those who have gone before us in faith is to celebrate the different ways in which the grace of God touched and transformed each one of them - and to affirm the hope that we share with them.

For this reason, as a sequel to All Saints’ Day, tomorrow the Church celebrates All Souls’ Day. We pray tomorrow that all who have died in God’s grace and are now being purified from the consequences of their sins may be admitted to the fullness of his kingdom – there to join the saints already in glory. Our prayers to the saints to intercede on our behalf, together our own intercessory prayers for one another and on behalf of the faithful departed, express our ongoing participation in that great eternal community in which hope is fulfilled in love and sin succumbs forever to forgiveness.