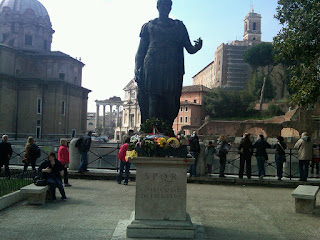 "The frenzy and the fury of the post-election period has laid bare the sheer idolatry and fanaticism of Christian Trumpism. ... When core biblical values are contingent, but support for Donald Trump is not, then idolatry is the result."

So wrote conservative Christian lawyer and pundit David French in "The Dangerous Idolatry of Christian Trumpism" - in the aftermath of last Saturday's "Jericho March" in Washington, DC, that strange display of the Trump anti-constitution cult at prayer, peppered with MyPillow commercials!

French's observation reminds me of my favorite Trump-era Evangelical comment, that I have quoted here so many times - Russell Moore's 2016 warning: "The religious right turns out to be the people the religious right warned us about."

Events like the "Jericho March" would be profoundly disturbing even without any religious component. They represent the descent into anti-constitutional and anti-democratic fanaticism and conspiratorial political paranoia on the part of a far too large faction, fed by falsehoods publicly promoted by people who ought to know better and spread by social media. Such tendencies have long been observed in American politics and have been found at times at both ends of the political spectrum. But unlike, for example, some of the anti-constitutional, anti-democratic fanaticism and conspiratorial ravings of some elements of ultra-left's would-be "revolutionaries" in the late 1960s and early 1970s (when we were still spared the pernicious effects of social media), this anti-constitutional and anti-democratic malevolence is tolerated and even endorsed by elements of an established political party!

But it is the scandalous corruption of religion that was on display at the "Jericho March" that is so especially troubling. It ought to be terribly troubling to anyone who cares about the future of authentic religion in this country, in which at least one-third of those in the 18-29 age group are apparently now religiously unaffiliated. Meanwhile, is it any surprise that for almost two-thirds of Americans belief in God is not seen as a prerequisite for a moral life, when so much of public religion seems to many to foster the very opposite?

Particularly curious was the participation of some Catholic clergy in the "Jericho March." I did not watch it myself. According to accounts that I have read, however, one priest purported to do an "exorcism." (Did he have faculties to do so?). Another supposedly praised "the greatest president we've had." (No, he wasn't referring to Washington or Lincoln!). "Lord," he continued, "you have given President Trump victory over all these enemies, and we ask you to give him and us victory once again." And, appearing via video, was a former Papal Nuncio to the U.S., long since fired from that job, who has increasingly devoted himself to undermining the Pope (an odd position for an Archbishop) while promoting President Trump, and who promoted this peculiar politics poorly disguised as faith: "The walls of the deep state, behind which evil is barricaded, will come crashing down."

What is one to make of all this?

On December 22, 1857, Servant of God Isaac Hecker had his first audience with Blessed Pope Pius IX, at which he. sought to share his surprisingly confident beliefs about Catholicism’s prospects in America. Pius was understandably worried about American political polarization (which would shortly result in Civil War) “in which parties get each other by the hair.” To this, Hecker confidently replied. “there is also the Catholic truth, which, if once known would come between these two parties and act like oil on troubled waters.” [“From a letter to the American Fathers, dated Rome, December 22, 1857]

More than a century and a half later, have proponents of an increasingly misguided "culture war" abandoned any interest in performing the role figures like Hecker hopefully once envisioned for the Church in America?
Photo: Statue of the "Divine" Julius Caesar, Via dei Fori Imperiali., Rome.
Posted by City Father