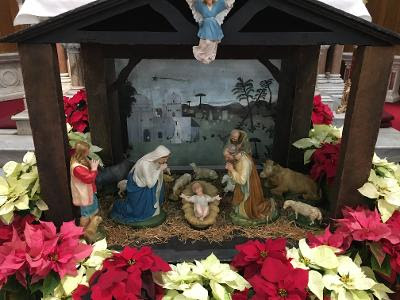 This past week, thinking about what I should say on this, my last Christmas with you all, I reread my homilies from my 10 Knoxville Christmases past. One thing I noticed was how much I repeated myself. No surprise, I suppose! How many new and different things can anyone say? And Christmas is, well, Christmas. We have been celebrating it for centuries. It is a very old story. What new is there to be said? Except, of course, that this has been a year unlike any most of us have ever experienced. So this Christmas is also unlike any most of us have been used to.

We see something similar in the TV Christmas classic A Charlie Brown Christmas, which I am sure most of you have seen, probably more than once, since its debut in 1965.  There, too, Christmas seemed to have lost a lot of its luster. But then it was precisely the retelling of the old story in its plainest simplest version - Luke’s story of the angel’s surprising message to the shepherds, the same story we just heard tonight - that seemed to say everything that needed to be said and so changed everything in the process.

Of course, people have been retelling - and adapting - the Christmas story for centuries in literature and, more recently, on screen. Everyone in the English-speaking world has heard of Charles Dickens’ A Christmas Carol. Some have actually read it. Most have seen some of the many movie and TV versions. Dickens was such a great fan of Christmas that he wrote several more Christmas stories. One of them, The Seven Poor Travellers – about a Christmas Eve spent by the narrator with 6 others in a hostel for travelers - includes Dickens’ famous line: “Christmas comes but once a year, which is unhappily too true, for when it begins to stay with us the whole year round we shall make this earth a very different place.”

Making the earth a different place is something of a staple Christmas theme. After all, Christmas is, as Dickens also famously said: “a good time; a kind, forgiving, charitable, pleasant time; the only time on the long calendar of the year, when men and women seem by one consent to open their shut-up hearts freely.”

Yet we all know how difficult opening those “shut-up hearts” of ours can be at even the best of times, and these are not the best of times. This year, many of us will have no place to go or anyone to be with this Christmas. Of course, every year there are people with no place to go, no one to be with, no one to give them gifts. For many, this is a day to feel even more lonely or maybe more poor than usual. Hence the permanent appeal of every Christmas story that confirms for us the power of Christmas to make a difference – whether for Ebenezer Scrooge in Victorian London, or for Mrs. Hamilton in 1940s New York in the Christmas movie The Bishop’s Wife, or for the Grinch in late 20th-century Whoville. In my own personal favorite Christmas movie, Miracle on 34th Street, Kris Kringle gets all sorts of different people to believe in him and be reconciled with one another – simply by doing the sorts of things that all those other people should have been doing anyway but had unfortunately become incapable of doing on their own.

Christmas – the Christmas that unites us here together in this church today – challenges us (to paraphrase C.S. Lewis) to believe that, in a world like ours, the Son of God became one of us – and then to imagine what must result!

“Imagine” may be a problematic word. It recalls a famous popular song imagining a utopia with no religion. A better word might be “dream” – as in the title of Pope Francis’ recent book, Let Us Dream: the Path to a Better Future, in which, as its subtitle suggests, the Pope makes expansive proposals for an alternative path.

But he begins by exploring what this pandemic can teach us, the opportunities for change contained in this crisis. He calls Covid-19 "our Noah moment, as long as we can find our way to the Ark of the ties that unite us: of love, and of a common belonging." For Francis, sounding like a modern-day Dickens, the pandemic "has made visible the throwaway culture," thus enabling us to respond to what indifference hides, opening us to new and unexpected possibilities that "burst the bonds of our thinking."

In his book, Francis shares with us some very personal crises in his own life, and how he learned from each of these profoundly painful personal experiences "that you suffer a lot, but if you allow it to change you, you come out better. But if you dig in you come out worse."

Formed himself in the Jesuit process of discernment, Francis invites us similarly to see a time of trial as “always a time of distinguishing the paths of the good that lead to the future from other paths that lead nowhere or backward. With clarity, we can better choose the first."

Which brings us back to Christmas and those shepherds!

Thanks again to covid-19, we must sadly do without Christmas pageants this year. But we may remember, perhaps from our own experience, how boys often compete to play Joseph or perhaps one of the kings, but not so many try out for the role of shepherd. Remember how, in A Charlie Brown Christmas, it was Linus who was assigned that role.

Back in 1st-century Israel, shepherds didn’t merit much respect either. As so often happens with low-status jobs that provide essential services (think of so many front-line workers today), the shepherds were under-appreciated, and they knew it. They were also probably pretty poor (again like so many “essential” workers today). The widespread tendency to admire the rich and despise the poor – what Adam Smith (1723-1790) called “the great and most universal cause of the corruption of our moral sentiments” – was likely as widespread then as it is now.

So they were probably as surprised as anyone when the angel announced the Savior’s birth to them. And, to them, a multitude of the heavenly host proclaimed peace to those on whom God’s favor rests. For maybe the first time, the shepherds experienced a completely free gift, rather than another commercial transaction. The gift was nothing less than what Saint Paul, writing to Titus, called the kindness and generous love of God our savior. The shepherds were being invited to experience God’s kindness and generous love themselves, and then to share it with others. And, just as surprisingly, that’s exactly what they did! In the 4th century, Saint Ambrose of Milan (340-397) famously called the shepherds’ at the manger “the beginning of the infant Church.”

If none of this had never happened, then of course the whole history of the past 20 centuries would have been very different, even the way we number our years and count our centuries.

And, more to the point, we ourselves would be very different. As Saint Augustine (354-430) so succinctly expressed it: “If [God’s] Word had not become flesh and had not dwelt among us, we would have had to believe that there was no connection between God and us, and we would have been in despair.”

But instead, because of Christmas, we do have an alternative to despair! Hence the angel’s reassuring words to the shepherds: Do not be afraid! We heard those same words this past Sunday, spoken by the angel to Mary. We will hear them again at Easter, from the mouth of the Risen Lord himself, the same Risen Lord whom we encounter whenever we celebrate the Eucharist.

Of course, all those people all really were afraid, and for good reasons. And for all our holiday cheer, so are we, worried above all about a dangerous disease that has taken control of our world. I know I am afraid. In another week, I must fly to my new home, and I am quite frankly frightened at the prospect of having to travel at this time under these circumstances. And, even if there were no covid-19, we would still have a lot to worry us. We would still be living in a country bitterly and angrily divided along racial, religious, and cultural fault lines and long festering unresolved conflicts, a country in which many have abandoned long-established constitutional and democratic norms which we as a country once all cherished – all this at a time when anxiety rather than hope seems to be dominant in much of the world, menaced as we are by our changing climate’s hotter-than-ever summers, rising sea levels, bigger-than-ever hurricanes, and frightening wildfires – and all the economic and social dislocation these calamities cause. It is in just such a world that we hear and celebrate this ancient, yet so contemporary-sounding story of the birth of a baby in poverty, far from home, his very life soon threatened by political violence, his family forced to seek asylum as political refugees.

Imprisoned by the Nazis in 1943, the German Protestant pastor Dietrich Bohoeffer (1906-1945) wrote to his parents, recalling a Christmas scene depicting the Holy Family “amidst the ruins of a broken down house.” He wrote: “We can, and should also, celebrate Christmas despite the ruins around us.”

That is why we celebrate Jesus’ birth not with a birthday cake but with the Eucharist, the Body and Blood of the Risen Christ. For this is not some nostalgic holiday pageant, some “let’s pretend” denial of the problems that surround us; and the baby whose birth we celebrate is not some distantly ancient historical or mythological figure, but God-with-us!

We celebrate tonight what we profess every Sunday: that the Only begotten Son of God … was incarnate of the Virgin Mary and became man. This is the Christmas story. Tonight, we kneel at those words, to solemnize what we celebrate, but we say those words all year round. The Christmas story is the Christian story – our story – all year round. It’s the story of God showing up in our world and sticking around – to free us from fear, once and for all.

A Catholic church has graced the top of this hill now for 165 years. Back then, so I am told, the poor, unpopular immigrants who made up the local Catholic community at that time would walk up this hill for Christmas morning Mass, penetrating the gloom of night and early morning with the light of their lanterns. That is what Christ’s coming does for our otherwise gloomy world, what Christmas calls each of us to do here and now. And so, having climbed this hill to this bright and beautiful church and here heard the familiar Christmas story, this story of God-with-us, we must make sure that it really remains our story, challenging us, wherever we will be in Chistmases future, to be transformed by it ourselves – and so transform our fear into trust, our frustration into fulfillment, our sadness into joy, our despair into hope, our hatred into love, our loneliness into community, our divisions into unity, our rivals and competitors into brothers and sisters, and our inevitable death into eternal life.

The entire Mass (in which the homily was somewhat abridged because of the snow) can be watched at:

The homily was repeated (this time in full) at the Christmas morning Mass, whihc can be watched at: