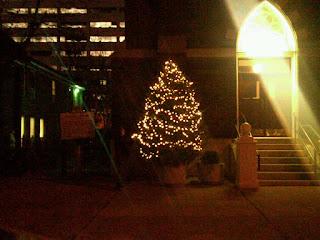 Sometime today, the sun is stopping its southward journey at its maximum distance from the equator - a stop known as the winter solstice, which results (here in the northern hemisphere) in the annual period of the shortest amount of daylight and the longest length of night.  It is a unique moment best appreciated in stillness and silence, which (not coincidentally) is how Advent was intended to be observed before it became just another adjunct to Christmas.

The ancient Roman holiday, Dies Natalis Solis Invicti ("the Day of the Birth of the Unconquered Sun", was celebrated at the Julian Calendar's Winter Solstice (December 25), the shortest day of the year, immediately after which the days being to lengthen. Some think that was a major factor in the choice of December 25 for the celebration of the Birth of Christ. Regardless, the symbolism of the Solstice has long been incorporated into the liturgical celebrations of the Advent and Christmas seasons. Likewise the imagery of the winter light festival has long been incorporated into the secular celebrations of the season. (Similarly, the Jewish feast of Hanukkah, although the historical event it commemorates - the rededication of the Temple by the Maccabees after its profanation by the Gentiles - itself has nothing to do with winter or wintry darkness, fits in perfectly with the winter light festival theme, because of the way it is celebrated by the lighting of one more candle each night for eight successive nights.)
So December is nature's darkest month but has been turned into the year's brightest by massive festive illumination, both indoors and out. It seems designed to end the annual cycle on its most hopeful note. And what could be more needed today, as this disastrously dark pandemic year comes to a depressing end, as we remain for the most part still separated and distanced from one another even at this most convivial season of the year?

Let us hope that the slowly but steadily increasing natural light will illuminate oour way into a far better new year!