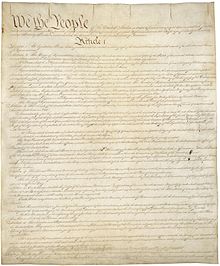 “The court should not abide this seditious abuse of the judicial process, and should send a clear and unmistakable signal that such abuse must never be replicated,” argues one of the briefs rebutting the absurd Texas lawsuit that is asking the Supreme Court to exercise its "original jurisdiction" to invalidate the votes of the citizens of four other states, which just happen to be the states that won the election for President-Elect Joe Biden, making possible the forthcoming eviction of Donald Trump from the White House.

Sedition is a strong word. I first learned it when I learned about the infamous Alien and Sedition Acts in school. Whether it is exactly the right word to describe what the Republicans have been doing can be debated. What is indisputable. however, is that this and all the other efforts to undermine constitutional government and democratic norms are perhaps the greatest threat to the fundamentals of our political system since the Civil War.

That the Republican Party is a fundamentally destructive force has been increasingly evident since the disastrous election of 1980. The fact that since 1988 that party has been able to win the popular vote in a presidential election only once (2004) and has lost it the remaining six elections suggests a growing awareness on the part of many Americans that the Republican party is increasingly inimical to the well being of most Americans. The Republican party's increasing abandonment of a commitment to constitutional governance and democratic norms  in its unseemly effort to acquire and maintain political represents an abandonment of the very premise of a political party in a constitutional order.  This is the ultimate danger of faction, so feared by the Founders who were so well schooled in how historically popular governments had been brought down in the past.

This past Tuesday was the so-called "Safe Harbor" Day. Theoretically, all the states have certified their election results, and the way is clear for the electors to meet next Monday to do their 12th amendment duty. After that all that remains is for the Congress to count the electors' cotes on January 6.

Given what we have seen so far, it seems not unlikely that, even if the Supreme Court gives this Texas lawsuit the short shrift it so eminently deserves, those unwilling to accept constitutional governance and democratic norms will engage in various antics in Congress on January 6.  Behavior Americans once perhaps too proudly dismissed as that of "Banana Republics" in the "Third World" will now be on display under the Capitol Dome.

And, while I have never been a big fan of federalism, I am increasingly grateful for the decentralized character of the American electoral process, which has protected us from clownish coup attempts. Even so, who can guarantee that the next time those plotting ot overturn the peoples' votes might turn out to be more competent?

As for the Electoral College, recent history has made it clear that it has outlived its usefulness. It remains the case, however, as I once argued as a college freshman in 1968, that it does provide finality. Once cast and counted, the electors' votes are decisive. And that this year may be its greatest service.