20th-Century "Soldiers of God" (The Book) 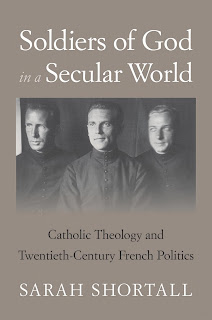 When I was in high school in the early 1960s, I came across a book about the French Worker-Priests Movement, which was by then already past history. It didn't make me want to become a worker-priest, but it did make me mildly interested in the new and lively developments in post-war French Catholicism. I then came across that post-war renaissance of French Catholicism indirectly in college when I first read and studied Albert Camus, who did engage intellectually with contemporary Catholic thinkers in France, especially among the Dominicans. Then in grad school, I delved into Jacques Maritain's political philosophy and the larger trajectory of the evolution of his thought in relation to 20th-century French Catholic political thought. Finally, in seminary, I studied the impact of French nouvelle theologie at Vatican II.

So it was with eager interest that I recently read Sarah Shortall's fascinating study of some of those impactful 20th-century French Jesuit and Dominican theologians, Soldiers of God in a Secular World: Catholic Theology and Twentieth-Century French Politics (Harvard U. Pr., 2021). I am sure that genuine scholars have already adequately reviewed Shortall's fine work. Without attempting anything like a thorough review, there are a few aspects about her study that I would particularly like to highlight.

There are any number of reasons why one should find the pioneering work of those 20th-century French Jesuit and Dominican theologians particularly interesting, not least because of the influence they exerted in the run up to (and during) the Second Vatican Council. Also, while the France in which Jesuits Henri de Lubac and Gaston Fessard and Dominicans Marie-Dominique Chenu and Yves Congar were formed was one where secularism had legally won, it was a France where Catholicism and ideologies still identified with Catholicism (like the problematic, right-wing Action française) were still fighting back. For Shortall, "the key quandary facing the Catholic Church in the twentieth century" became "how to maintain a public role for itself once the institutions of public life has been secularized.” (Analogously, this was one of Paulist founder Isaac Hecker's concerns in the 19th century, a question still unresolved in the U.S. today.) It is her contention that, through the work of these theologians, “the Church became modern by asking, not how Catholics came to ‘accept’ or ‘embrace’ typically modern principles, but how they contested and transformed what it meant to be modern.” (In a sense, that was what Hecker was trying to do in offering Roman Catholicism as an alternative to Protestant Liberalism.)

The new theological responses the book identifies followed two broad directions. There were the Dominicans, who followed Saint Thomas Aquinas and made "a distinction between the natural and supernatural ends of human life, which allowed it to grant a certain degree of autonomy to temporal affairs," and there were the Jesuits, led by de Lubac, who went back farther than Thomas to the Church Fathers and who "insisted that it was not possible to imagine an autonomous order of human affairs that was oriented to a purely natural end" and so "looked to the Church rather than the state as the primary framework for collective life." Revived Thomism "tied the antimodernist Church of the turn of the century that reinvented itself as the primary defender of human rights and democracy in the latter half of the twentieth century," while the Jesuits rejected liberal politics' premises "including the primacy of the individual, the sovereignty of the state, and the distinction between the private and public spheres." But both approaches transcended (and presumably if retrieved might still help us today to transcend) secular political categories and distinctions between "right" and "left."

The Leonine renewal of Thomism, was one way out of the 19th-century impasse, an alternative to integralist intransigence. But it may also allow too much to secularism. In contrast (like Hecker) “de Lubac stressed the internal dynamism of human nature, in which the supernatural was already at work, infusing and raising up the natural order from within.”

The first part of the book is particularly interesting for the way it connects the origins of these developments with both the Jesuits' and the Dominicans' experiences of "exile." After the separation of Church and State, the two communities were expelled from France and forced to relocate their formation - the Jesuits to the British island of Jersey and the Dominicans to Belgium. For Shortall, this isolation "served as a powerful stimulus for intellectual production." Not for the first time in the Church's history, the restrictions imposed by state persecution helped renew and revitalize the Church internally. Then, at the opposite extreme, so to speak, from the isolation of exile, compulsory military service during World War I, besides toning down the conflict between Church and State, brought the young Jesuits and Dominicans into contact with a whole other class of Frenchmen. "They were astounded by the level of unbelief they observed among the men they encountered in the trenches" and realized "the need for new apologetic and evangelical tools to bridge" the great gulf between the Church and the French masses.

Shortall also pays attention to something that students of ideas may otherwise overlook: "the need to attend to the communities and institutions in which religious thought takes shape," in particular "the distinctive spirituality fo the order and the affective bonds forged in the course of religious life" and  particularly the crucial role of friendship in the development of ideas.

The second section of the book addresses the experience of World War II, German occupation, and the Vichy regime. For many Catholics, still alienated from the secularist Third Republic, "Petain was the providential man sent to lead the nation in its penance." Shortall characterizes the Petain regime as "a rather vague project of moral and physical regeneration," which accordingly appealed to a wide audience, while achieving "a degree of Church-state harmony not seen since the 1870s." In this challenging situation, "theology became  a key political tool in the context of war precisely because it seemed to be apolitical." For the Jesuits, this period marked the beginning of a shift in focus from incarnation to eschatology, "a reorientation that would shape their postwar theological work in crucial ways." Meanwhile, on the Thomist side, "the war witnessed the first flowering of a distinctly Catholic human rights theory," which simultaneously defended universal human dignity against Nazi totalitarianism, while distancing itself from the 18th-century liberal tradition of rights."

The book's third part highlights the critical twenty years from the end of the war to the end of the the Second Vatican Council. This was the era of postwar Catholic engagement with the Left, the period of the Mission de France and the "Worker Priests" experiment. The Thomist model facilitated "acknowledging the presence of grace in even the most secular and anticlerical milieus." Chenu famously said: "The task of the missionary is not to figure out how the Church, as it is now, will be the shape of the world; it is to discover how the world, as it is now, will be the material for the Church." This was also the peak period of a vibrant Catholic existentialism, which "served as a counterpoint to the main Catholic humanism of the day - the Thomist anthropology that underwrote Jacques Maritain's theory of human rights."

Then came the crisis, the attack on the ressourcement project's "intrusion of historical thinking into theology" and the crackdown on the Catholic Left that even Maritain barely escaped. Even so, Shortall highlights how the movement was actually gaining influence during this period as a new generation of European theologians arose (among them Joseph Ratzinger) who were influenced by the likes of de Lubac, Chenu, and Congar, while Catholic students from Africa, Asia, and Latin America "became engaged in the main currents of French Catholic thought."

With Vatican II, nouvelle theologie came into its own. Yet the debate over Gaudium et Spes highlighted the split between the Thomist incarnational approach, with its positive valuation of worldly affairs, and the Jesuits' more Augustinian and eschatological emphasis on the centrality of the supernatural. "Both groups grappled with the same problem: how to bridge the divide between the church and the modern world without reducing one to the other." The split would be reflected in the post-conciliar split between the journals Concilium and Communio.

A brief Epilogue traces the continuing influence of these theologians in the dramatically changes context of post-Conciliar Catholicism, in which pews and seminaries emptied in Europe while the Church;'s demographic center shifted south. Liberation theologians found "a model capable of overcoming the separation between the natural and supernatural orders and endowing the struggle for social justice with redemptive value." In Europe too the "theological turn" in continental philosophy reflected "the affinities between Catholic antimodernism and secular postmodernism - their shared suspicion of the modern cult of universal reason, the transcendental subject, and historical progress." Meanwhile, secularism itself has come to be better understood as "a positive ideology in its own right, by which the state seeks to manage religion and police the public forms it can assume."

A century later, that "exile" experience still speaks in part because it remains so relevant!