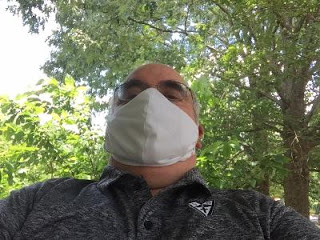 It has been said that the one and only lesson we seem to learn from history is that we don't learn from history. So here we go again, ripping off the masks that, along with vaccines and boosters, have been our main protection against the insidious covid virus that shows no sign of departing the scene it has dominated for two years now. (Wearing masks in public has also protected many of us from flu and colds as well.) I flew on a plane Tuesday, the first full day after the infamous Trump-appointed Florida judge's malevolent ruling striking down the CDC's mask mandate. (Why, after all, should the government institution appointed precisely to protect public health be able actually to protect public health?) On the plane, I was one of maybe 10% at most who were wearing masks on the plane. I celebrated Mass in a church today where (thankfully) most congregants were masked but by no means all - even there in a neighborhood with one of the highest infection rates in the nation! Not only do we never seem to learn any lessons from even our most recent history, we seem as a society to revel in that regrettable reality.

In hac lacrimarum valle, masks are a common-sense response to a dangerously ubiquitous but somewhat manageable threat. Common sense! What we used to call "ordinary" means of protecting one's own and others' health and well being. Nothing ultra-burdensome or "extraordinary," just common sense combined with a modicum of public-spiritedness.

Call it individualism or libertarianism or whatever, there is something in American culture that crosses class and other social divisions and unites our society in a rejection of public spiritedness, in a perennially persistent pattern of self-induced self-destruction.