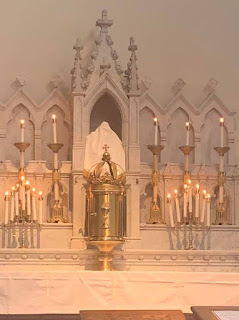 Like nature itself, like the sun's annual cycle of recurring seasons, the annual commemoration of Christ's death and resurrection invests these special days we call Easter with a special spiritual resonance unlike any other. Of course, Christ's death and resurrection are recalled daily at every Mass and weekly in our communal Sunday celebration of the Lord's Day. But among these recurring overlapping cycles of celebration, this annual observance of renewal rooted in remembrance stands out for its totalizing focus and dramatic depth.

So once again, all over the world, we enter into three dramatic days – the first (Friday) devoted to Christ crucified, the second (Saturday) to Christ buried, and the third (Sunday) to Christ risen. We will begin the first of these three days tonight when we celebrate the solemn Mass of the Lord’s Supper, which takes us back to he most memorable meal in all of human history, that famous Last Supper which Jesus ate with his disciples, and we will end that first day almost 24 hours later with Mary at the foot of the cross.

In doing this, however, we will not just remember Jesus’ Last Supper with his disciples, as if it were some interesting thing that happened a long time ago. Rather we will celebrate how Jesus’ Last Supper continues daily in the Church as the Lord’s Supper.

Saint Paul’s letters are among the oldest New Testament writings, and his first letter to the Corinthians, from which we will hear at Mass tonight, gives us the earliest written account of the Last Supper [1 Corinthians 11:23-26]. Paul, of course, already knew the whole story when he wrote about it, but It’s a good guess that none of the disciples, as they sat down to that supper, celebrated that year as this year one day before Passover, as yet understood that by the time that holiday began, some 24 hours later, Jesus would be dead and buried, and they would all be in hiding.

Just as likely, none of them yet realized how this otherwise ordinary meal would be dramatically transformed by Jesus’ own words and actions into the Church’s central sacrament.

For the New Testament tells us how, from the very beginning, Christian communities have devoted themselves to the breaking of bread and prayers [Acts 2:42]. As the Church grew in size and expanded in influence, the Church’s worship, centered on the regular celebration of the Lord’s Supper as Christ’s sacrifice of reconciliation, would in time transform, the Roman empire and, then, an ever-wider world – as it must still continue to transform each one of us, caught up in the priestly embrace of Christ’s reconciling sacrifice.

So it is only fitting that the first day of our Easter celebration, the day on which we will commemorate Christ’s passion and death, should begin by recalling this supreme act of reconciliation, in which Jesus summed up what his death and resurrection are about and what the Church is about.

Which is why this same Eucharist, this same Lord’s Supper, has been celebrated generation after generation and is at the very heart of the Church’s life. It is, as the old saying goes, the sacrament that makes the Church.

But Saint Paul’s account of the Lord’s Supper also poses a challenge. For that earliest written account of what happened at the Last Supper was written not so much to tell us a nice story as to tell us a troubling, challenging one. Paul was, in fact, complaining, criticizing the Corinthians, quite pointedly, for their behavior, telling them that they were missing the point of the Lord’s Supper – receiving the Lord’s Body and Blood in an unworthy manner to their great peril. In giving this instruction, I do not praise the fact that your meetings are doing more harm than good [1 Corinthians 11:17] .

The four short verses we will hear tonight from Paul’s letter are part of a longer text, which until about 50 years ago used to be read in its entirety at that Mass and which provides the fuller context for Paul’s account. It highlights the Corinthians’ conflicts, class divisions, dissensions, and factions – and the Corinthians’ consequent failure to be changed by the Eucharist.

Then as now, in first-century Corinth among those to whom Saint Paul’s account of the Last Supper was originally addressed, all was not well in the Church, let alone in the larger society. (When indeed has it ever been?) In particular, the social conflicts, class divisions, dissensions, and factions - in other words, the ordinary life of Roman secular society - were making themselves felt within the Corinthian Church, such that the community’s celebration of the Lord’s Supper still seemed to mirror those same secular priorities in the form of social conflicts, class divisions, dissensions, and factions. What Paul apparently wanted his hearers to understand was that all those things that, then as now, matter so much in secular society, must not matter any more within the community of Christ’s body.

Of course, the Corinthians couldn’t quite help bringing the world with them to Mass, any more than we can. That’s why what happens there is so important, enabling us to leave from there different from how we came, enabling us to bring something new with us back out into the world, something new and different from the same old social conflicts, class divisions, dissensions, and factions we brought with us from the world.

So it is no accident that we dedicate church buildings and set them apart (even by their distinctive appearance and shape and furniture) from the society that surrounds them. For the Lord’s Supper is not just some meal like any other, and the community it creates cannot be just some social club like any other. What happens at the Lord's Supper and within the community it creates is meant to make us different from who we would otherwise have been, from the world we came here from and to which we must, for the time being, return.

Yet how brittle is this community created by our common presence at the table of the Lord's Supper! As our secular society fragments thanks to increasingly strident cultural, generational, national, regional, and even sexual fault lines, do we not experience those same divisions tearing us apart inside as well as outside our churches?

In his homily at this morning's Chrism Mass in Rome, Pope Francis addressed the assembled priests: "Being priests, dear brothers, is a grace, a very great grace, yet it is not primarily a grace for us, but for our people." By extension, being disciples united around the table of the Lord's Supper is likewise a very great grace, and it too is given not solely for us, as if the Church were some sort of private social or political club, but for the wider world.

The decisive difference is in the direction of the influence. What so upset Saint Paul was how what the Corinthians brought with them from their society seemed to set the agenda for the community rather than the other way around, how little changed they were, how unchanged they emerged from their celebration of the Lord's Supper. Would he be any less upset with us?

Back at the original Last Supper, in the scene that follows next in John’s Gospel, Satan is said to have entered Judas, who, then, after taking a morsel of food from Jesus, left the Supper. He went out into the night – leaving behind Jesus and his disciples, the community that could have been his, in order to commit himself instead to Satan’s cause.

What was that morsel of food Judas received from Jesus? Was it perhaps the Eucharist? What a warning for us there is in that!

As for Judas, so also for us now, at the Lord’s Supper, how we depart matters much more than how we first arrived. We all arrive inevitably burdened by whatever social baggage, whatever social conflicts, class divisions, dissensions, and factions we have brought with us. But how ready and willing are we to be changed by our experience of the Lord's Supper and depart transformed?