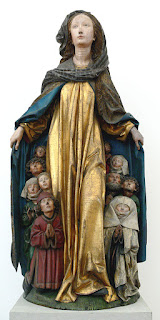 In the first season's final episode of the 2019 Starz miniseries The Spanish Princess, Catherine of Aragon cleverly waylays Henry VIII on the road in order to be the the first to tell him of the death of his father and his own accession to the throne, telling him his father had "passed into God's mercy." Assuming the scene - and therefore the conversation - to be completely fictional, I nonetheless wondered whether the felicitous expression Catherine used was also an invention or perhaps reflected an obscure Britishism of which I was unaware. That latter thought reoccurred to me two weeks ago as I listened to the official Proclamation of King Charles III's accession, which began by announcing that it had "pleased Almighty God to call to his mercy" the late Queen Elizabeth II. There it was again - God's mercy at the moment of death, this one very obviously not fictional.

Today is traditionally the commemoration of Our Lady of Mercy, historically associated with the visions of Saint Peter Nolasco, Saint Raymond of Pennafort, and King James I of Aragon, leading to the founding of a religious order for the purpose of redeeming Christian captives from their Muslim captors. With variations of title, "Our Lady of Mercy" has often been portrayed sheltering people under her mantle - as, for example, in the 15th-century Ravensburger Schutzmantelmadonna, pictured above.

Theologian Walter Cardinal Kasper famously called mercy "the justice that is idiosyncratic to God" [Mercy: The Essence of the Gospel and the Key to Christian Life, tr. William Madges, Paulist Pr., 2013, p. 89].

By way of contrast, I recently read a rather curious article by a right-wing Catholic convert concerning a certain contemporary American bishop. "For those committed to small-tent Catholicism," the author suggested, that particular bishop's "emphasis on God’s mercy is a red flag." Setting aside for the moment the horrifying substance of this statement, it is its distinctly political language which really ought to come across as "a red flag." I take it "small-tent" is the opposite of "big-tent," a term typically used to refer to political parties and other analogous coalitions which aspire to broaden their base by appealing to a wider range of people, either for ideological reasons or simply to win more votes. It is a perfectly legitimate term, a useful term in its proper context, but it is obviously a properly political term. Its use here highlights the increasing tendency on the part of some to subsume religious faith and practice to the pursuit of political power.

By analogy, I suppose, big-tent Catholicism might suggest a style of religious practice preoccupied with reaching out to include others not already inside, which might, as circumstances suggest, refer to a wide range of people - everyone from inactive Catholics to the unchurched. It sounds suspiciously like the Church's mission of evangelization, what Pope Saint Paul VI suggested is the Church's essential mission - in keeping with Jesus' parting instructions to his Church in Matthew 28 and with what has been revealed to us about God himself, as we heard at Mass just this past Sunday, that God wills everyone to be saved and to come to knowledge of the truth (1 Timothy 2:4).

Perhaps I should not try to speak for those who use the term, but I have to suppose that small-tent Catholicism is intended to be the opposite. Instead of a tent open on all sides as Abraham's supposedly was, this tent has its sides closed to keep others out, thus denying hospitality to those wandering in the desert - and in the process missing out on who might be met. Do not neglect to show hospitality to strangers, for thereby some have entertained angels unawares (Hebrews 13;12). What must be the spiritual mindset of one for whom "emphasis on God’s mercy is a red flag"? In contrast, in tomorrow's liturgy, the Church will pray: O God, who manifest your almighty power above all by pardoning and showing mercy (Collect, 26th Sunday in Ordinary Time).

Stranded as we presently are in hac lacrymarum vale, I value Abraham's tent being open on all sides and so appreciate a big-tent Catholicism, which has not forgotten that mercy is most characteristic of God. For, as Portia famously said, in the course of justice, none of us should see salvation (Merchant of Venice, act 4, scene 1). That being so, how fortunate for us that mercy is, indeed, "the justice that is idiosyncratic to God"!