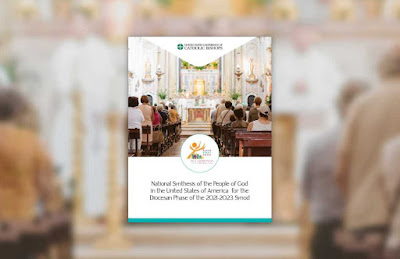 For the last year, the Catholic Church in the U.S. has been involved in what is called the diocesan phase of the 2021-2023 Synod. American Catholic communities - primarily and particularly parishes - have been meeting and dialoguing for the past several months, with varying results. Admittedly a very, very small contingent of American Catholics actually participated, which should certainly surprise no one. Nor should anyone be surprised that most participants are older rather than younger. That said, the various reports from around the U.S. have been synthesized. That composite result has now been made public in the USCCB's report, entitled National Synthesis of the People of God in the United States of America for the Diocesan Phase of the 2021-2023 Synod. This document is available free on the USCCB website.

Unsurprisingly, the Synthesis recognizes that this process was originally "met with a combination of excitement, confusion, and skepticism," but that the process itself has been experienced in a very positive manner. What else was unsurprising? Well, almost breathtaking in its obviousness is the observation that "Parish life and social activities foster a sense of community and strengthen personal relationships among members."

Equally unsurprising to anyone familiar with the lay-of-the land in the U.S. Church in this post-pandemic era are the "enduring wounds" diagnosed by the synodal process. Thanks to recurring scandals, trust in the Church hierarchy is "weak." The pandemic, meanwhile, has accelerated "a trend towards disengagement and intensifying the isolation and loneliness of many, youth and the elderly in particular." Perhaps, more stress might be put on the recognition that this is "accelerating" a trend already very much in process when the pandemic began.

The religious and political polarization that everyone sees as a defining characteristic of our time gets the attention it deserves. The Synthesis recognizes "the divisive political ideologies present in our society have seeped into all aspects of our lives," and "that the differences over how to celebrate the liturgy 'sometimes reach the level of animosity'." Somewhat surprisingly, the Synthesis admits that for many "the perceived lack of unity among the bishops of the United States, and even of some individual bishops with the Holy Father, as a source of grave scandal." Talk of "grave scandal" about officialdom's behavior is strong language in an official document. It at least suggests some sincere effort to get out of officialdom's bubble.

Again somewhat unsurprising if one is familiar with what seems to be the trend in public opinion, but, of course, somewhat more problematic because it potentially involves doctrinal issues is the perception "especially for some youth" of "the church as hypocritical and failing to act consistently with justice toward" certain "diverse communities." Obviously especially problematic is this very strange statement: "Ordination for women emerged not primarily as a solution to the problem of the priest shortage, but as a matter of justice." (Note the political rather than religious language employed here.) What do such statements actually accomplish, except perhaps to provide ammunition with which some may wish to diminish the document's more plausible contributions in other areas?

Put positively, a commonly expressed desire is "to be a more welcoming Church where all members of the People of God can find accompaniment on the journey." More substantively, there is apparently a widespread desire for "lifelong formation," and for help in understanding "the connection between Catholic social teaching and outreach beyond the borders of the parish." Some "want their pastors and bishops to explore more deeply with the laity how best to participate in understanding the mission of the Church and its efforts to evangelize it members and the world."

On the other hand, there is a lot of sadness. "Practically all synodal consultations shared a deep ache in the wake of the departure of young people and viewed this as integrally connected to becoming a more welcoming Church" and "Young people's waning participation in parish life was a source of great pain for many older community members." The tragic consequences of the loss of Sunday was specifically noted. Clear concerns were also expressed about the desire for "greater transparency regarding decision making."

The Synthesis concludes with an appreciation of how "the rediscovery of listening is a basic posture of a Church called to ongoing conversion is one of the most valuable gifts of the synodal experience in the United States." It recognizes that "one may agree or disagree with some of the perceptions heard and expressed, but we cannot assume they have no importance in lived reality." This is a wholesome counter to the tendency in today's polarized society to dismiss out of hand any facts that don't automatically fit one's personal or political paradigm.

To the extent that we actually listen, the Synthesis suggests, "perceptions become more realistic and less based on broader cultural or political narratives."

I am not exactly sure what comes next in this long and complex process, which will further filter the ground-level input into something to be discussed at the Synod. If, however, this is what the USCCB is contributing to the next phase, then this may represent a positive and, for the most part, constructive step toward whatever ultimate direction this synodal process may be pushing us.