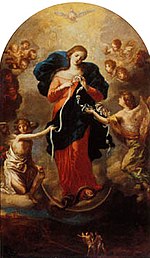 Today in certain places and calendars is commemorated Mary, the Mother of God, under the title Undoer of Knots. This devotion has become more widely known during the pontificate of Pope Francis, who years ago embraced this devotion and the image associated with it. Maria Knotenlöserin is a baroque painting by Johann Georg Melchior Schmidtner (1625-1707), which shows Mary standing on a crescent moon, surrounded by angels, with the Holy Spirit above her (in the form of a dove), her foot on the head of a serpent (symbol of Satan), while she unties knots from a long ribbon. It is believed that this image of Mary untying knots is derived from Saint Irenaeus of Lyons, who described how the ancient knot of Eve's disobedience had been loosened by Mary's obedience (Adversus Haereses, III, 22).

According to Pope Francis' biographer Austen Ivereigh (The Great Reformer: Francis and the Making of a Radical Pope, 2014), Fr. Bergoglio (as he then was) made a pilgrimage to Augsburg where he contemplated this painting, which spoke to him at that critical juncture in his Jesuit vocation. According to Ivereigh, Bergoglio "took back with him a load of Maria Knotenlöserin prayer cards. In the 1990s, after a local copy of the painting—known in Spanish as María Desatanudos was hung in a church in Buenos Aires, it took off in an extraordinary way, leading Bergoglio later to say he had never felt so much in the hands of God."

As Archbishop of Buenos Aires, Bergoglio also sent his seminarians copies of this image of Mary as problem-solver, which became very popular and is the object of monthly pilgrimages. Since then, he has composed this prayer: Mary, Undoer of Knots, pray for us. Through your grace, your intercession, and your example, deliver us from all evil, Our Lady, and untie the knots that prevent us from being united with God, so that we, free from sin and error, may find him in all things, may have our hearts placed in him, and may serve him always in our brothers and sisters. Amen.

Until relatively recently, I had, I must admit, never heard of this devotion. Its imagery is immensely powerful and capable of universal appeal, however. Each of us has experienced a multitude of knots limiting and burdening our lives. For those of us in this  journey-to-completion stage of life, the knots most often have to do with whatever remains unresolved from the past - unresolved failures, losses, hurts - while often holding onto anger about what should have happened or perhaps not have happened, regretting missed opportunities or roads not taken. There is more than enough to be unraveled there.