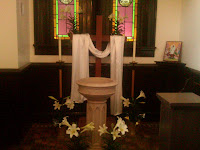 One of my all-time favorite scenes in literature takes place on Easter Eve as a despairing Faust prepares to drink the poison with which he plans to end his pointless life. Suddenly he hears the sound of church bells.

What deep humming [Faust exclaims] what a clarion tone,
Draws from my lips the glass with mighty power!
You deep-toned bells. Make you already known
The Easter feast’s first solemn hour?

Though Faust’s faith is weak and his hope all but gone, even so just the sound of the Easter bells brings him back from the brink of death, for wonted to this strain from infancy, Faust says, Back now to life again it calls me.

Like Faust, we too have all heard the Easter bells, as year after year they work their wonders in our hearts. Back in the Bronx in the 1950s, the sound of the Easter bells set in motion an important annual ritual in my home. In those days, of course, the Easter Vigil service was celebrated in the early hours of Saturday morning. So hardly anyone was in church to hear the indoor bell-ringing at the Gloria. But then, promptly at noon on Saturday, when Lent ended and Easter officially began, churches all over the world let loose a cacophony of bells. Meanwhile, my grandmother had sat us all down at the kitchen table and tuned the radio to the Italian station, where we could hear the best bells of all – the bells of Rome’s several hundred churches (recorded earlier at noon Italian time) – all peeling gloriously, as we, obedient to my grandmother’s command, cracked open our Easter eggs, which we quickly consumed in eager anticipation of our next course – our Easter chocolate!

And it was good chocolate! We had our standard-issue milk-chocolate Easter Bunnies, of course, but that was for later. For Saturday noon’s 1st Easter chocolate, however, there was only the best, solid, dark, Italian chocolate!

But enough about chocolate; back to the bells! Tonight, those Easter bells still proclaim Christ is risen, in words addressed directly to us. As we celebrate this central mystery of our faith today, we are invited to relive the amazing experience of Mary Magdalene and the other Mary, who came to see the tomb as the first day of the week was dawning [Matthew 28:1].

It was way beyond the capacity of any of the Gospel writers to describe the actual, immediate event of the resurrection. What the New Testament describes and what we – with Mary Magdalene and the other Mary and so many others ever since (even Faust) - experience today are its effects - its wonderful effects in our lives and in our world. It matters very much what Jesus said and did in his earthly life; but, thanks to Easter, it matters even more what he is doing now.

For the Easter story, that the Easter bells proclaim so powerfully year after year, is really two interconnected stories – Jesus’ story and our story. Likewise, our Easter faith involves two interconnected claims: about Jesus, that the same Jesus who lived and died now lives again in glory; and, about us, that we, though we too must likewise die, we too will also live again with him, whose resurrection has thus become ours as well.

Matthew’s Gospel account of Jesus’ Passion, which he heard on Palm Sunday, ended with Jesus’ burial, and the tomb being secured with a stone and a seal [Matthew 27:66]. He was buried – in something of a hurry because of the impending Sabbath. For, as we heard again tonight, on the 7th day of creation, God had rested from all the work he had undertaken in creating the world Genesis 2:2]. And, on the 7th day of the week, the Sabbath, Jesus rested in the tomb.

But, on the next day, instead of staying dead (as corpses were supposed to do), Jesus did something very different. Instead of staying dead, he lives again – and lives so full of the living breath of God’s Holy Spirit that he lives a totally transformed and gloriously new kind of life. That 1st creation was over in 7 days. But the next day, the 8th day, is the start of something new.

In a world which seems permanently stuck in that dark, pre-dawn position, where suffering and death always seem to have the last word, the women at the tomb needed to experience the kind of change that could only come about by the Risen Christ’s living presence among them. And so do we, which is why we are here, where the Risen Lord brings us together as no one else can, bringing us together in his Church, where we become what we could never otherwise have been, doing what we could never otherwise have done, empowered and energized by the Risen One himself alive in his Church.

So, instead of the 1st day of the week condemning the world back to business as usual, this day after the Sabbath is starting something new – not just a new week, but a new world, in which death no longer has the final say. All of us are here today because God did not stop on the 7th day, because there is now another day on which God has, so to speak, recreated the world. That new day is today – and every day from now on.
Easter invites us to put ourselves in the position of the fearful yet overjoyed women at the tomb – unexpectedly (and excitedly) experiencing something wonderfully and completely new in a world where everything else seems so ordinary and old. That is why we have to come back, Sunday after Sunday, to be filled in on what happens next. That is why every day for the next 7 weeks, the Church listens to the experience of the very 1st Christians, as recorded in the Acts of the Apostles. Hearing their story, the story of those who first experienced the presence and action of the Risen Lord in their own lives, we can begin to consider the difference the Risen Christ is making right here and now in us.
The story of those first communities of Christians shows us how to begin to live in the present that new and different future to which the Risen Lord is leading us, in which (as we just heard St. Paul proclaim) just as Christ was raised from the dead by the glory of the Father, we too might live in newness of life [Romans 6:4].

So today – and every day – as we recall the death Christ has freed us from, let us eagerly embrace the new life he has freed us for.

Let’s keep those Easter bells always ringing in our hearts, in our lives, in our world!

So now let’s ring those bells again one more time, like we really mean it!