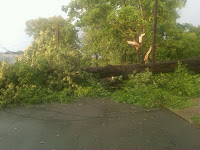 After such a gloriously festive Easter celebration, I treated myself to an unaccustomed day off on Easter Monday. After an afternoon at the movies (Of Gods and Men), I was enjoying a relaxing and convivial dinner at home with my associate pastor and our Paulist novice (now winding down his Lenten assignment at Blessed John XXIII University parish), when a powerful (albeit predicted) thunderstorm started. For a few minutes, it was the typical total downpour, an awesome display of weather which normally ends after a short time. Before it ended, however, all of a sudden the lights went out. Our novice came back into the dining room to tell us that a large tree had fallen completely - blocking the street and that it had taken down with it all the power lines. We all knew immediately that we were now looking not at some brief interruption in electricity but a night - and likely longer - of darkness.
My last previous blackout experience was the Assumption Eve New York Blackout of 2003. The thing about blackouts is that there is almost nothing normal that one can do. At this season, at the western end of the Eastern Time Zone, the sun doesn't set until about 8:30. So, once the storm was over, we were able to sit out on the porch. One could talk to the neighbors, and watch the strangers who came to our block to gawk at the tree trunk, and one could read. (Ironically, I had been originally expected to do some serious reading in my room that evening. In the end, I did briefly read - my Office - on the porch). Before long, however, it was too dark to read even outdoors and it was already too dark to do much of anything indoors. (I kept thinking of William Manchester's book about the Middle Ages, A World Lit Only By Fire).
Our lives really have become so almost completely dependent upon electricity - electric light, most especially, but not just light. There's the ubiquitous TV, which dominates most of the time we spend together - and often our time alone as well. Without TV, what is there to do?
In the 2003 NY Blackout, I was living in a much larger community and we all gathered on the 3rd floor for a steak diner, most of us sitting in the hallway. That was kind of fun, while it lasted. But then it was over, and there was nothing really that one could do but go to bed. After the initial excitement, blackouts are basically bad experiences. Food spoils and is wasted, for example. In the end, there is really little to do during a blackout but go to bed. That's not such a bad idea. We could all do with more sleep. Unfortunately, if you are supposed to sleep with a CPAP machine, then sleeping without electric power is problematic - and potentially dangerous. (That is why on this second night without power at home, I have taken a room in the hotel right next to the church).
Blackouts are a good reminder that, however we may at times romanticize the simple life, the fact is that most of us have long lost the capacity to cope with living as our ancestors did.
Posted by City Father