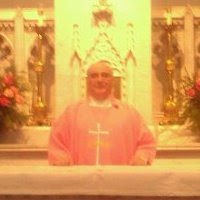 Being half-way through Lent probably mattered much more back when Lent was really taken seriously, but it still serves as a significant marker on the road toward Easter – both the Easter that is three weeks away and the eternal Easter, which is our ultimate goal. So, even though it is Lent, the Church lightens its Lenten demeanor tomorrow, allowing flowers to decorate altars and more extensive organ playing. Most noticeably, the Lenten purple is relieved by the use of rose-colored vestments, which are what really make Laetare Sunday so noticeable.

Given the state of the world, it may sometimes seem as if all of life were one long Lent. Certainly, the traditional Lenten practices of prayer, self-denial, and charity are necessary all year long - and all life long. Laetare Sunday is less a break from that dimension of Christian life than it is a highlighting of the ultimately joyful focus of such a life.

Appropriately, Laetare Sunday has also been the traditional day for the annual blessing of the Golden Rose, a gold ornament blessed by the Pope and bestowed as a papal honor. It has been given to kings, queens, princes, princesses, governments, cities, churches, and shrines. During his 2008 pilgrimage to the U.S., Pope Benedict XVI bestowed it on the Basilica of the National Shrine of the Immaculate Conception in Washington, D.C. According to Pope Innocent III (1160-1216): “As Laetare Sunday, the day set apart for this function, represents love after hate, joy after sorrow, and fullness after hunger, so does the rose, by its color, odor, and taste, designate love, joy, and satiety respectively.”

In YouTube's rich treasury of historic videos, I have fooudn at least two (one British, one Italian) of Queen Elena of Italy receiving the Golden Rose in 1937 on the occasion of her 25th wedding anniversary: http://www.britishpathe.com/record.php?id=7321 and http://www.youtube.com/watch?v=XTh6iGG2RAI.

Born Princess Jelena of Montenegro in 1873, she became a Catholic and married the future King Vittorio Emmanuele III of Italy in 1896, becoming Queen Elena of Italy in 1900. Her frugal husband once remarked that, if he were not so careful about his money, the Queen would completely impoverish them by giving it all away to the poor. She died in exile in France in 1952. The cause for her canonization was introduced in 2001.

Speaking of candidates for sainthood, today marks the 6th anniversary of the death of the Venerable Servant of God, Pope John Paul II, who will be beatified one month from now on May 1, after which we will be able to pray: Blessed John Paul II, pray for us.
Posted by City Father