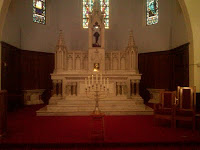 Other than the morning Mass on Easter itself, my favorite liturgy of the Easter Triduum has always been the Mass of the Lord's Supper on Holy Thursday. I had the privilege of celebrating the Holy Thursday liturgy several times during my 10 years at St. Paul the Apostle in New York - an amazing liturgical experience that has only increased my love for that Mass. So it was with real joy that I approached the celebration of my first Holy Thursday as pastor here at Immaculate Conception Church in Knoxville.

Triduum liturgies are special in ever so many ways. One of those ways that they are special is that those who like to attend them often have very specific memories of past celebrations. So they bring particular expectations to the liturgy - expectations the celebrant (especially a new pastor) may not even be aware of. Of course, the celebrant himself has his own set of expectations - collected over the decades from Holy Weeks past. So I was admittedly just a little nervous. Not about the rite itself. I know how to do that, and in any case (other then the logistical nightmare of the Mandatum and the choreography of the procession) Holy Thursday is really a rather straightforwardly simple liturgy. That's as it should be for the Mass celebrating the institution of the Eucharist and the priesthood. It is, after all, essentially a Mass (with some additional features added on).

Traditionally, Holy Thursday has been in a very special way the pastor's liturgy. (Of course, in the one-priest parishes that are increasingly the norm, virtually every liturgy is the pastor's liturgy). In my home parish where I grew up, the pastor always celebrated the Solemn Mass on Palm Sunday and the Mass of the Lord's Supper on Holy Thursday, delegating the other solemn ceremonies to others. In those days too the Ordinary typically blessed the palms, then presided in choir dress at the Mass that followed. The Ordinary had to celebrate the Chrism Mass, of course, and typically also celebrated the Mass of the Lord's Supper, but then was content to preside in choir dress on Friday and Saturday, before pontificating again on Easter Sunday morning. And, of course, the Washing of the Feet - to the extent that particular 1950s innovation actually makes much sense - makes the most sense symbolically when it is the pastor who is doing it.

So, although I have celebrated Holy Thursday before, last night was special because it was the first time I did so as a pastor, and it made me even more than usually conscious of the special bond between a pastor and his parishioners.

I was encouraged too by the good attendance - 205, (some 50 more than last year). When it comes to Triduum attendance, it is always important to recall that the best attended Triduum liturgy (and the only one most people will actually attend) is Easter Sunday morning. Probably the second most attended (at leat in my experience to-date) is Good Friday. Holy Thursday has a devoted following, but is typically probably not among the bigger draws. So I was very encouraged by the attendance (especially given the fact that we were competing for parking space with a big outdoor concert downtown!).

After last night's beautiful and uplifting celebration, I was at the church early this morning for the Office of Readings and Morning Prayer (a.k.a. Tenebrae). There were 10 of us altogether (including me and the cantor), but for an unfamiliar morning service on what is, after all, a workday for most people, I was pleased. We'll be doing it again tomorrow, when hopefully more people will be free to attend!

Numbers aside, the main thing I like to tell myself (and all those involved in preparing Holy Week ceremonies) is that, while punctilious fidelity to the rubrics is even more essential than usual for these special celebrations, these are, first and foremost, sacramentals of extraordinary power and efficacy. The reason for celebrating them so elaborately is precisely to facilitate the sacramenatl efficacy of these rites in the hearts and mids of those who participate.
Posted by City Father