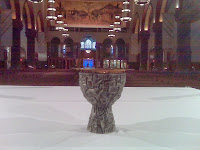 In (it must have been) 1966, I read an article entitled "Peace Comes of Age," written to mark the 21st anniversary of the end of World War II. Since then, of course, the official age of maturity has been reduced to 18. So, as I mark my 18th anniversary of ordination  today, can I speak of finally having "come of age" as a priest? I'd like to think so!

I had fun at the school Mass this morning making the connection between my ordination and the famous "Patron of Hopeless Cases and Things Despaired of," Saint Jude, whose feast day today is.  It was a convenient coincidence, of course, that the timing of my long-delayed call to orders led to my being ordained on this day. But I appreciated the significance of the date right away and was happy to suggest it - and happier still when a Bishop was designated to make it finally happen.

Being ordained alone and out of season and way from the more commonly chosen Paulist ordination site, virtually all the planning fell into my lap. It was dignified and celebratory, but not overdone. My family drove up from New York. So did some friends whose surprise visit amazed and thrilled me. And a respectable number of Paulists turned out too. It tied the loose ends of the past together and made imaginable the promise of new hope.

Looking forward from that marvelous day, the priesthood remains constantly new, constantly challenging. Deep down I have always understood that priesthood is most rewardingly lived in pastoring, and it has been my joy to have been allowed to do so these 18 years.

Meanwhile, to help me reflect on this particular milestone, I have been reading a book I bought in the Methodist bookstore at Lake Junaluska last week while on retreat - William H. Willimon, Pastor: The Theology and Practice of Ordained Ministry (Abingdon Press, 2002).

Willimon is a United Methodist Bishop, who (not surprisingly) approaches the theology of orders and pastoral ministry through a Reformation lens, which leads him here and there to depart from a Catholic or Orthodox understanding. But those particular points of difference are easily recognizable and are the obvious ones we would expect. Thus identified, they do not further detract from his book's abundant theological and pastoral wisdom. Browsing the bookstore while on a retreat that was focused on the priesthood, I was fortunate to find it - and since then to find in it much to meditate upon as I approached yet another anniversary of my priestly ordination.

Among the book's many stand-out sentences are paragraphs like this: "Christians are those who, through Scripture, are taught to name the world, not merely as 'nature,' but rather as 'Creation.' We learn to name our lives not as under the grip of fate, or luck, but as guided and cared for by providence. We do not make 'mistakes.' We sin. We do not want to be improved. We hope for salvation" (p. 125)

Or this (in his chapter on pastoral counseling): "Christians are those who discover that their lives are also a story told by God. We are not the authors of our lives. God speaks in such a way that, eventually, by God's grace, our lives become a word to be spoken to the world. It is our faith that nothing will silence or hinder the creation of that world" (p. 186).

Sentences such as the above are not singularly about being clergy but about being Christian - the defining context for priestly pastoral ministry. So in writing about what it means to be a pastor, the author cannot avoid writing about what it means to be Church, Hence, his choice to reflect upon pastoral ministry in tandem with a reading of the Acts of the Apostles - Luke's inspiring account of the dynamic inner life and evangelistic growth of the apostolic Church - a book he interprets "as an early Christian narrative of the challenges of church leadership" (p. 12).

Thus, this is very definitely a book about pastoring. Early on, he insists: "damage is done to the unique quality of the pastoral vocation when it is conflated with the vocation of all Christians to follow Jesus." Hence his stated preference for referring to "pastors" or "priests" rather than "ministers" (pp. 16-17).

Particularly helpful to me as a priest is the author's liturgical orientation. Prayer, he recalls, is the Church's way of life in Acts - "primary to all other activity, the source of the church's power to witness in word and deed to what has happened int he world because of Jesus Christ" (p. 75). Relying on Saint Justin Martyr's late 1st-century description of Sunday Mass, he identifies eight acts of the Church's ministry, which must inform the priestly ministry of pastors - gathering, remembering, listening, praying, offering, giving thanks, distributing God's gifts to the people, and scattering into the world to herald the kingdom of God (pp. 77-79). The connection couldn't be clearer between this time-honored ritual shape of Catholic liturgy and the mission of a parish and its pastor.

Willimon has much more to say about so many aspects of priestly pastoring, some of which I hope to return to later in the week. I was, however, struck by the consistently counter-cultural challenge that permeates his analysis. One point in particular really resonated with me as i have experienced our contemporary catechetical crisis is his prediction that more pastoral energy will need to be devoted to Christian education and formation to enable our people "to know how to analyze the corrosive acids within the surrounding and essentially indifferent - at times openly hostile - dominant culture." He calls on pastors to "stress doctrine, the classical texts of our faith, our master narratives, the great themes," recognizing that the culture we now live in "is no longer a prop for the church" (p.  71).

The challenges to the Church from the direction of contemporary culture are just that - challenges. They should, I've often said, send us back, over and over, to the experience of the Church in Acts and its lessons.  What a great era this can be in which to be a priest!