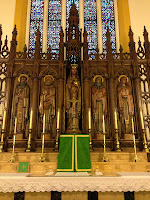 Two people went up to the temple area to pray; one was a Pharisee and the other was a tax collector. So begins one of Jesus’ most famous parables [Luke 18:9-14].


In Jesus’ time, the Pharisees were devout laymen, preoccupied with being holy and fulfilling God’s Law. They were among the most religiously observant and morally upstanding people in 1st-century Israel. After the destruction of the Temple, later in the century, it was the Pharisees who rebuilt Jewish life and reconstituted it in its post-biblical form. So they were perceived as opponents by the early Christians – one reason why the New Testament tends to highlight stories of Jesus’ conflicts with the Pharisees.


Even then, the New Testament also preserves the memory of the good relations Jesus had with various Pharisees and the important beliefs they shared in common. In any case, we can only fully appreciate the parable if we understand that the Pharisee is the presumptive good guy in the story – and is, in fact, a good, religiously and morally upstanding person. Only then will we appreciate the surprise at the end.


Now the Pharisee, we are told, prayed: “O God, I thank you that I am not like the rest of humanity – greedy, dishonest, adulterous … I fast twice a week, and I pay tithes on my whole income.”


Presumably, he was telling the truth. The parable would make very little sense if he were some hypocrite, who didn’t live the way he said he did. No, the whole point is precisely that he is a religiously and morally upstanding person, who obeys God’s law. Indeed, he does even more than the minimum the Law requires. So, if anyone were going to go home justified, shouldn’t it be the Pharisee?


But the tax collector stood off at a distance and would not even raise his eyes to heaven but beat his breast and prayed, “O God, be merciful to me a sinner.”


Like the Pharisee, the tax collector was also telling the truth. Without knowing anything else about him, we know that, as a tax collector, he collaborated with the Romans – and so was widely seen as a sinner. After all, God had given the land of Israel as part of his permanent promise to his people forever. So to collaborate with the Romans was self-evidently sinful. Everyone would have understood it that way. Hence, the tax collector’s honest prayer: “O God, be merciful to me a sinner.”


But God had long been in the habit of being merciful – all the way back to when he first made clothes for Adam and Eve after they sinned. So, if the tax collector were truly sorry for his sins, God might be merciful even to him, and he too might go home justified. That would have made a nice, happy ending to the parable.


Jesus, however, had a surprise in store, which must have totally shocked his audience. “I tell you, the tax collector went home justified, not the Pharisee.”


The shock was not that God’s mercy might extend even to the tax collector and that he also could go home justified, but that the Pharisee – in spite of all the good he was doing, in spite of his faithful obedience to God’s law – did not!


What went wrong? In acknowledging his sin, the tax collector  acknowledged that only God could get him out of the hole he had hopelessly dug for himself. The Pharisee, for all his moral correctness, spoke his prayer to himself. Even as he prayed, he remained focused on himself – as if he, on his own, could ever be the source of true goodness, as if being justified in relation to God could ever be his own accomplishment. That was – and is – a universal human temptation – as common in the 21st-century as in the 1st. We all want praise. Yet didn’t Jesus, just 3 weeks ago, warn us? When you have done all you have been commanded to do, say, “We are unprofitable servants; we have done what we were obliged to do.”


If only the Pharisee had heard that and taken those words to heart! Then he might have understood – as the tax collector, whatever his other faults, clearly did – that God didn’t owe him anything. The kingdom of God is not about what I have accomplished. In fact, it’s not about me at all. It’s about God and about experiencing the mercy of God in my life, and so allowing myself to be changed by that experience of God’s mercy here and now, so as to continue to experience God’s mercy in his kingdom for all eternity.