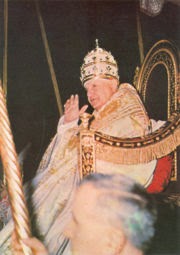 Yesterday, in observance of Blessed John XXIII's feast day, I posted on Facebook a link to the 25 YouTube videos of John's papal coronation on November 4, 1958. (The link to the first is http://www.youtube.com/watch?v=qTmHIguIKBw)
Most of the ceremony is included, which makes it a true treasure, both liturgical and historical. It is all in black-and-white, of course, and the commentary, such as it is, is all in Italian. If one understands it, so much the better; but my guess is that even someone with no Italian but with some familiarity with traditional Catholic ritual should probably be able to figure out what is going on, at least most of the time. Of course, most people probably will be unfamiliar with Pontifical Terce and the rest of the ritual surrounding a Bishop's entrance and vesting. But it's obvious enough that the central action is a Mass - with an awful lot of prep beforehand and a coronation added on at the end.
The videos are a great window into all of that now lost ritual, never likely to be experienced again - and more than that to a certain style of celebration that is completely alien to our much more self-conscious, performance-oriented age. This was immediately recognized in one of the comments posted in response to my link: I really love how the pre-TV era liturgies and ceremonies are so un-self-conscious. They "just do it" without a performance sense; it is quite moving and challenging for all of us who are called to pray liturgy.

That comment is so right. The rubrics are punctiliously observed, but a pre-TV-era mentality and resulting behavior are there for all to see. So the Master of Ceremonies leans on the altar to point out to the pope where to incense next. And he is regularly seen signaling to others and otherwise moving the action along. The Pontifical Canon's pages are turned and it is moved from one side of the altar to the other with no apparent concern for the noise the microphone will pick up. Such indifference to appearance seems jarring today. It is unimaginable to us today that at a papal Mass, such a clutter of people would ever get to be seen sharing the visual stage with the pope and that so much of the logistical activity would ever be seen on camera! But in that now lost, un-media-obsessed world it was all perfectly normal.

Yet the ritual is "un-self-conscious" in an even more basic sense - not just in its lack of attentiveness to media concerns but in the way that everyone just does whatever tradition and custom call for. Everybody wears what he is supposed to wear and does what he is supposed to do. These were not personal choices at all - and certainly not choices that somehow were thought to say something about one's beliefs or personality or priorities. For example, the falda (the traditional skirt the pope wore at papal Mass, which severely restricted his freedom of movement and required no end of being picked up and spread out by others) may have been one of the most absurd liturgical trappings ever to have evolved. But that was what one wore when one was going to be crowned pope, and therefore that was all there was to it! Everyone dressed and acted one's part, without indulging in personal preferences. Ritual ruled. Individual personality was secondary to one's public role and office. That was, after all, the genius of the old Roman liturgy - whether at Low Mass or at the most solemn pontifical papal Mass.

Certainly, it was right to change the ritual - to make the papal Mass more comprehensible to the world as the act of a Bishop, shepherding the Church at prayer, rather than the ritualized comings and goings of a renaissance prince and his court. In the process, however, have we inadvertently done something more? Have we so personalized our worship - whether the simple Mass in a plain mission chapel or the pontifical rite in a splendid basilica - in ways which paradoxically take attention away from what we are actually there to do?
Posted by City Father