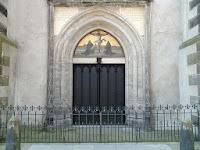 On this day in 1517, Martin Luther famously nailed his 95 Theses to the door (photo) of the University Church in Wittenberg, unleashing the great ecclesiastical calamity of the 2nd millennium - the Protestant Reformation. (In school as kids, we were taught never to call it that, always to refer to it as the Protestant Revolt, reserving the term "Reformation" for the Catholic Reformation, aka the Counter-Reformation." Words matter, but whatever one calls what Martin Luther unleashed, it was - and remains - a catastrophic calamity for the Church and by extension, therefore, for the world.)

The separation from the Catholic Church of what became the Protestant Churches (and the Protestant countries) of northern Europe was an inestimable loss to both sides, a loss which the general trajectory of both Catholic and Protestant communities has more recently begun to try to remedy. And certainly much misunderstanding has been corrected and many opportunities for collaboration and even shared worship have been among the beneficial fruits of modern ecumenism. Over a century ago, Paulist Founder, Servant of God Isaac Hecker hopefully anticipated this: "Who knows? Perhaps the time has come when men will consider impartially the causes which have brought about the deplorable religious dissensions and divisions existing among Christians, and that a movement is about to set it on all sides towards unity, and the prayer of Christ that “all who believe in Him might be made perfect in unity” will find its fulfillment. This is our hope. To contribute to this result we labor" (The Church and the Age, 1887, p. 235).

I first seriously studied Luther (and Calvin) not in seminary but earlier as a grad student in political theory. I easily found in Luther, the person, someone I could appreciate - not for his rebellion or for his dismantling of the sacramental economy or for his subordination of the Church to secular princes, but for his personal struggle with his own scrupulosity, his struggle - as it is usually phrased - to "find a gracious God." Ein Feste Burg ist unser Gott is not just a stirring hymn (though it certainly is that), but more importantly it is a celebration of what a merciful God has done - and continues to do - on our behalf and an invitation to a new and more abundant life as a result. It may have historically been the anthem of the Reformation, but it is a hymn we can all join in singing

Sheldon Wolin's Politics and Vision introduced me seriously to John Calvin as a substantive theorist of ecclesial and social order, a re-situation of the individual in community contrary to the Reformation's more extreme individualizing and anti-institutional tendencies. Meanwhile, a graduate seminar with Paul Ramsey and Horton Davies took me directly into Calvin's most monumental work The Institutes of the Christian Religion. There I was personally particularly touched, for example, by Calvin's treatment of Divine Providence in his in Part 2 of The Institutes, chapter 17, notably section 10, Without certainty about God's providence life would be unbearable.

The New England Transcendentalists, who so influenced Hecker were part of a reaction against classical Calvinist theology. Hecker himself assimilated the Transcendentalist critique of Calvinism, but my impression is that he had little or no direct familiarity with the spirituality of classical Calvinism, let alone with with the writings of Calvin himself. Indeed, Hecker’s understanding of Protestantism was largely derived from his early experience with the Transcendentalists. His diagnosis of 19th-century American Protestantism as being in decline may have been prescient. It may, in some respects, have anticipated the 20th-century decline of the so-called "Mainline" Protestant denominationalism with which we are all now so familiar, but it was a limited perspective nonetheless. As Paulist Father James McVann acknowledged (in his 2-volume unpublished history of the Paulists), Hecker’s “facts and figures mostly took account of a decline in Eastern Massachusetts, without considering the strong roots of Protestantism in other parts of America, which his travels South and West should have shown him.” It is fair to say  that Hecker’s limited experience of American Protestantism failed to appreciate evangelical Protestantism’s continued relevance and dynamic energy in modern and post-modern society. The mutual sharing of Catholic and Evangelical ideas and spiritual insights that is occurring today offers much promise for contemporary American religious experience - and, by extension therefore, for the re-evangelization of American society.