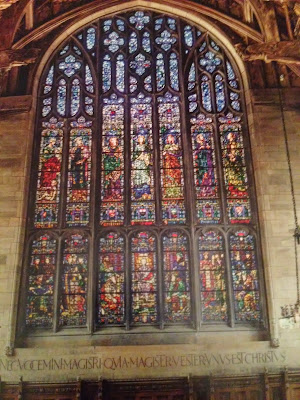 100 years ago this month, on October 22, 1913, Princeton University's Graduate College was dedicated, in the presence of former U.S. Presidents William Howard Taft and Grover Cleveland - but not the current President Woodrow Wilson. Wilson's famously stormy tenure as President of Princeton had ended a few years previously when Wilson lost his battle with Graduate School Dean Andrew Fleming West over the location of the graduate students' residence. Wilson had wanted to house them in the heart of the campus among the undergraduates. West fought for the comparatively distant site where he hoped to house a distinct and scholarly community. Then as now, money talked. West's successful fundraising among alumni prevailed. He got his Graduate College, while Wilson abandoned Princeton for the governorship of New Jersey and the White House. (It's often been argued that Wilson's failure as Princeton's president foreshadowed his laster failure in Washington. But that's another discussion!)

100 years later, the Graduate College still stands on its hill - the same hill from which Washington watched the Battle of Princeton on January 3, 1777. It remains physically and psychologically apart, although, being both younger and fitter then, I remember easily making the trek back and forth between the "GC" and the rest of campus more than once many a day! The picturesque Graduate College complex, with its Oxford-looking entries and courtyard dominated by Cleveland Tower, is justly considered one of the great examples of the medieval Gothic revival on university campuses. Living there in the early 1970s, I experienced for the first time the charm (and drafty cold) of a wood-burning fireplace. Its wood-paneled Gothic "Common Room" was a joy to sit in - the first "common room" I ever experienced, the first time in fact I'd ever even heard the term "common room"! But the GC's crown jewel was always Procter Hall, named for Procter and Gamble's William Procter (Class of 1883), one of West's wealthy donors. That Ivory Soap money was certainly put to good use! The medieval-looking, long hall, with its wood-beam ceiling was where we dined "family style" - in academic robes - precisely at 6:30 p.m. daily. The "family style" is gone now as are the robes, but the sheer beauty of the place remains untarnished by today's vulgar, post-modern eating arrangements.
And dominating the room remains the amazing window (photo above) portraying the seven liberal arts of medieval education. Imagine eating dinner looking up at that every day! Imagine too every day reading the inscription below the window: Nec vocemini magistri sed magister vester unus est Christus - "Do not be called teachers for your one teacher is Christ"(Matthew 23:10). At the time, it always seemed to me strange to see that there. After all, almost everyone in the room expected to end up a professor someday! Looking back now, I can better appreciate its sense. And don't think I haven't routinely told the story of that inscription in homilies whenever that Gospel saying comes up!

I left academia 32 years ago, and it's been almost as many years since I last laid eyes on the GC. In so many ways, those Watergate years were not the best of times. But in many ways for me personally it was a very good time and I was happy there. I had friends and a modicum of social life in that scholarly community. Most importantly, I thought I'd found my direction in life and a clear career path.. It turned out I was wrong about all that. But it was still a happy time and a very formative time, in which I learned a lot - and not just about political philosophy.

So, thank you, Andrew Fleming West, William Procter, Grover Cleveland, et al, for outmaneuvering Woodrow Wilson! (If only the Hapsburgs had been so lucky!)
Posted by City Father