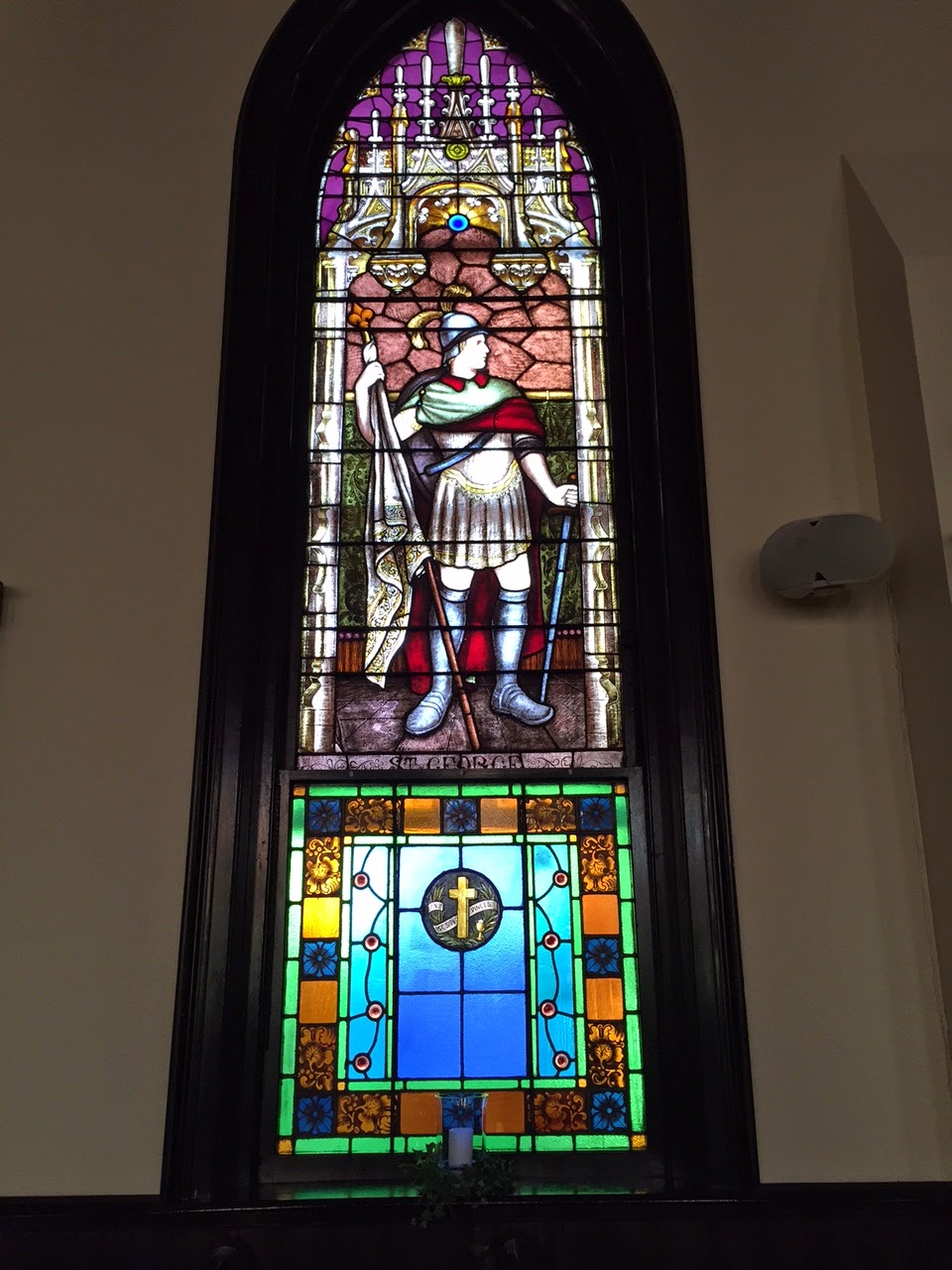 The last time I was in the UK (several years ago now), I spent a couple of days in a village near London at the home of a Church-of- England Vicar I had become friends with during my sabbatical at St. George's House, Windsor, in my memorable European summer of 2005. He and his family were very hospitable, and it was wonderful to have that opportunity to spend some time with them in their parish.

When we and a handful of his parishioners gathered for Morning Prayer on April 23, my friend reminded everyone that it was the feast of Saint George, the patron of England, and so had its own proper Office.

(St George is indeed England's patron saint, and the flag of England remains the red cross of St George on a white field. To most of us, it is more familiar as one component of the UK's "Union Flag" - the combined crosses of Saints George, Andrew, and Patrick. In that form, St George's cross continues to appear on a number of the world's flags. The red-on-white cross of St George also appears above the shield in Ontario's Provincial flag.)

After Prayer that morning, I noted that in my own (Roman) Breviary, the proper reading in the Office was from a sermon by Saint Peter Damian (1007-1072), who praised Saint George as a man who abandoned one army for another, who gave up the rank of tribune to enlist as a soldier for Christ, and who plunged into the thick of the battle, an ardent soldier for Christ.

All we know for certain about Saint George is that he was martyred in Palestine at the beginning of the 4th century and was venerated in both East and West long before tradition turned this onetime Roman soldier into a medieval knight. In Rome, the second Lenten station, on the day after Ash Wednesday, is at the Church of San Giorgio in Velabro, one of those wonderful ancient Roman churches that I would likely never have gotten to see the inside of, were it not for the wonderful tradition of the Lenten stations. As I wrote on this blog back on February 28, 2012, "there is something special about going to these venerable Roman churches in the pre-dawn darkness, walking literally in the steps of centuries of Christians who have visited those same churches on those same days, celebrating Mass surrounded by the relics and memories of martyrs, then emerging in the early morning light to continue one’s daily work. It is a true experience of the communion of saints!"

As for Saint George, he was - Peter Damian recalls - consumed with the fire of the Holy spirit. Armed with the invincible standard of the cross, he did battle with an evil king and acquitted himself so well that, in vanquishing the king, he overcame the prince of all wicked spirits, and encouraged other soldiers of Christ to perform brave deeds in his cause.

No wonder medieval tradition portrayed Saint George as a gallant knight slaying the monstrous dragon - the Book of Revelation's classic image of the Evil One, the Devil, against whom, as Pope Francis (whose onomastico day is today) has so frequently reminded us, the Christian life is a continuous battle.

Such a diverse group, but all, like George, combatants in our continuing contest with the Dragon!
Posted by City Father