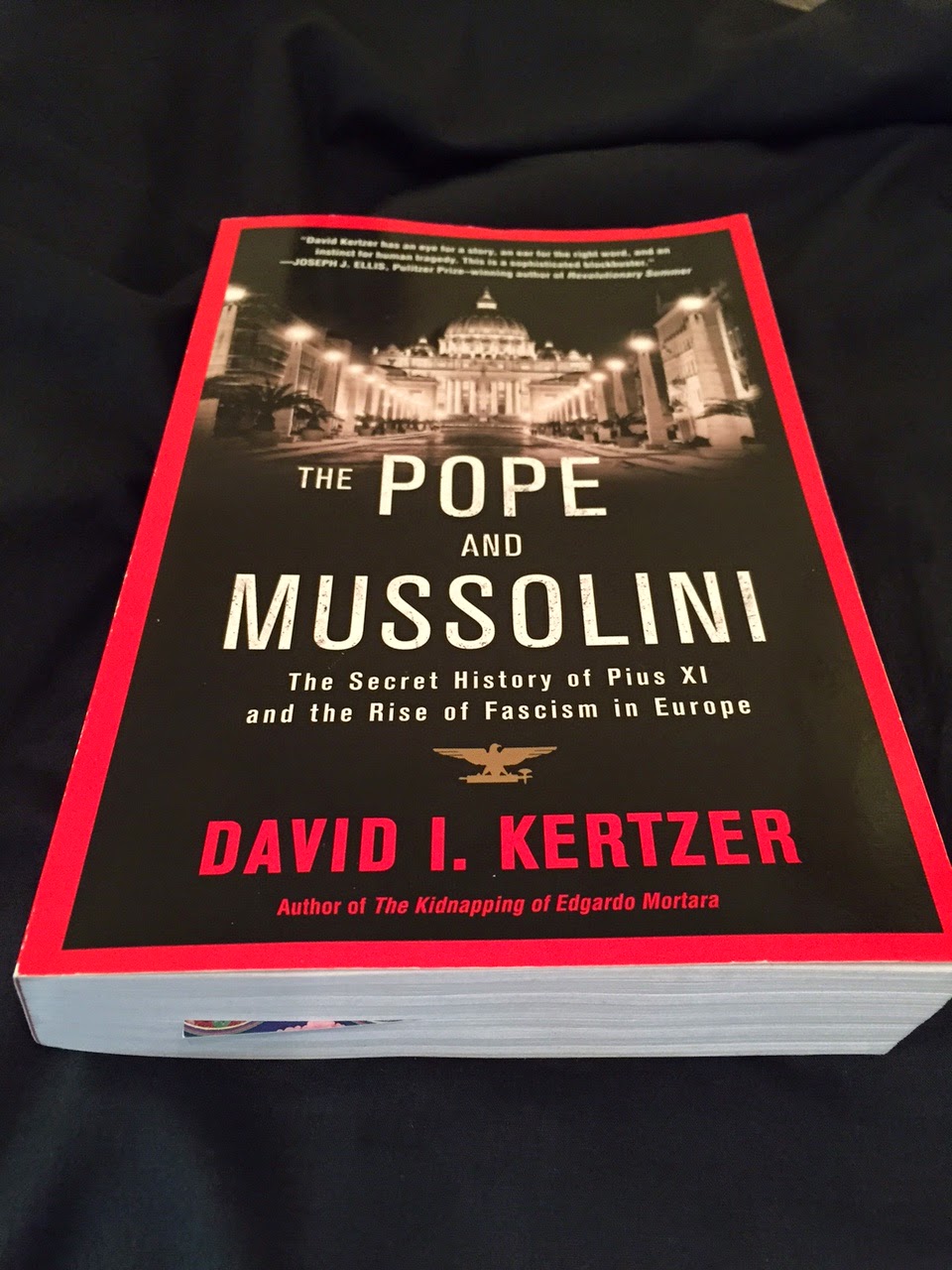 Adolf Hitler's 126th birthday seems an appropriate occasion to write about yet another book about the World War II era. David Kertzer's The Pope and Mussolini: The Secret History of Pius XI and the Rise of Fascism in Europe (Random House, 2014) is primarily about the papacy, particularly Pope Pius XI, and the Church's relationship with Fascist Italy, particularly its Duce Benito Mussolini - the critical period before World War II but also the period before and after the historic 1929 reconciliation between the Church and the kingdom of Italy and its accompanying concordat.

Both Pius XI and Mussolini and the peculiarities of their personalities have been much studied already. The author highlights the particular impact of the personalities of the two leaders who faced each other across the Tiber. Whatever else it was, the World War II era was one of big personalities; and anyone studying that era must be ready to recognize the historical largeness of the leading figures of the period - Hitler and Mussolini, Stalin, Churchill, Roosevelt, and DeGaulle, and the 2 Popes, Pius XI and Pius XII. There were, of course, institutional, non-personality elements also at play in the history of that time. After all, the Church itself, however much it may bear the personal imprint of whoever occupies the papal throne at the moment, is ultimately a complex institution, spanning centuries of time and encompassing all the world's continents. And all the secular political leaders of the era were also conditioned and to some extent limited (some more than others) by their national cultures and institutions. Mussolini, much more than Hitler, for example, was always limited by his comparable lack of absolute power - thanks to the limited character of post-unification Italian political culture and also to the continued competing presence of surviving non-fascist institutions in Italy, notably the King and the Church.

The author certainly seems to grasp all that, and his treatment of the larger-than-life personalities of Pius XI and Mussolini benefits from his appreciation of those institutional contexts. He also avoids the kind of retrospective revisionist history that judges the pre-war period and the decisions leaders made then with post-war 20-20 hindsight. Especially when considering someone like Mussolini, it is important to remember how relatively positively he was perceived early on by so many elements that would later have reasons to revise their opinions.  It wasn't just my grandmother who admired Mussolini for the changes he had brought to Italy's failed political order. Churchill and Roosevelt thought well of him too - at least until Mussolini began to become a challenge to international peace and stability. Not surprisingly, Pius XI had reason to think well of anyone who put an end to the state of war between the Vatican and the Quirinal, not only resolving the Roman Question - very much to the Church's advantage - but also regularizing the relationship between Church and State in Italy in a way which conformed quite well with the then reigning theological understanding of what was optimal in Church-state relations.

Personally, I have long been of the opinion that had Mussolini been less foolhardy in his ultimately disastrous embrace of the German alliance, had he - like Spain's Franco, for example, - remained neutral in the war, he would (like Franco) probably have died peacefully in his bed (as also would, of course, lots of Italians for whom the war was to be such a total disaster). Kertzer dismisses the long-popular theory that Mussolini suffered from syphilis. Still, he was clearly in decline by the time of the war and presumably would not have lasted that much longer anyway. Eventually, under Umberto II, I suspect an Italy that had remained neutral in the war would likely have evolved in the post-war world in a more moderate post-fascist direction, much as post-Franco Spain would subsequently develop in the 1970s. All of which would put pre-war judgments in a very different historical context.

On the other hand, everything I have read on the subject suggests to me that both the King and the Church were better positioned (than perhaps either appreciated) to act against Mussolini. In the end, the king did act to remove him. He probably could have acted earlier, and would have better served both Italy and the world (and more likely saved his dynasty too).

Well, that's not how it happened, of course. What actually did happen is the story the author tells in a way which both recognizes the actual time when the judgments in question were being made as well as alternative possibilities that actually had a real chance of happening but which for various reasons did not. That is especially relevant in the case of Pius XI, because he clearly had some significant second thoughts about his dealings with Mussolini and was moving in a decidedly different direction at the end of his life - a movement cut short by his sudden death in 1939. The author describes the evolution of Pius XI's reassessment of Mussolini, which largely paralleled Mussolini's evolution into a vassal of Hitler. In particular he revisits the now familiar story of the planned encyclical against racism, which Pius XI was secretly having drafted when he died, as well the speech Pius had planned to give, which then remained secret for 20 years after his death prevented his giving it.

Throughout, the author seems sensitive to the complexities of Pius XI and presents him accordingly - a not so much sympathetic as balanced presentation. Given his subject, he has somewhat less to say about Pius XI's successor, whom he generally portrays in a much less favorable manner. But that is really a whole other discussion, which many more authors have already weighed in on - on both sides.

Any system of government entails a complicated interaction of personal and institutional factors. This is true of both "absolute" monarchies like the papacy and representative constitutional systems. The Pope and Mussolini illustrates the particular challenges and distinctive dynamics that papal government faces in the modern world, especially with a strong personality like Pius XI on the papal throne (a not uncommon state of affairs in the 20th century). Respecting what was unique to the special situation of the 1920s and 1930s, one can nonetheless extrapolate from this account much that is relevant to examining later engagements between the Church and the world.
Posted by City Father