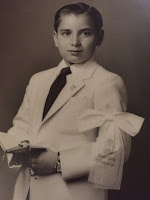 Today was the 60th anniversary of my First Holy Communion.  I'll be reminiscing a bit about that event in my homily for Corpus Christi (transferred in the United States from its proper day, today, to this coming Sunday.) So I'll spare such details today.

Napoleon Bonaparte - the 18th-century Corsican soldier who eventually turned himself into an emperor and successfully persuaded/compelled poor Pope Pius VII to come to Paris in person to watch Napoleon crown himself - that Napoleon, who presumably enjoyed many successful and happy days in his adventurous life, famously described his First Communion as the happiest day of his life.

Of course, what many – maybe most – of us remember best about our First Communion Day, is all the frills: the outfits, the photos, the presents. Those are all perfectly nice things, of course, and should not be disparaged. As for the actual act of Communion itself, it may perhaps stand out less because it in fact merges in memory with so many other subsequent trips to the altar rail - for many of us  (brought up post-Pius X) at least once a week, for those of us in religious life, likely as often as once a day. That's a lot of Communions! So, if the first one merges in memory with all those subsequent Communions, that may be as it should be. As I always like to stress with First Communicants on their big day, the key word to remember about the experience is first – the first time they are doing what (hopefully) they are going to be doing many more times, over and over again, at least once each week, all the rest of their lives. (In Napoleon's time, that was less so, of course, which may have especially elevated the event in theconsciousness of late 18th-century children.)

Unlike Baptism, Confirmation, and Holy Orders, which are defining, once-for-all events, unlike matrimony, which for many is a once-in-a-lifetime event and is normally at most celebrated only rarely in one's life, and unlike the "healing" sacraments of penance and anointing, which are occasional, as needed, events, the Eucharist really is meant to be the regularly repeated sacrament. That sense may have been lost for much of our history, but that was always contrary to the plain sense of the liturgy, e.g., so many of the  post-communion prayers. As Saint Thomas Aquinas explained, by Baptism a person is ordered to the Eucharist, so that by virtue of being baptized one is destined for the Eucharist by the Church (Summa Theologica, III, q. 73, art. 3)

I understand, of course, the new problems the practice of frequent communion may have inadvertently created. Even so, in this most important respect, I count myself very fortunate to have come of age in the post-Pius X Church.