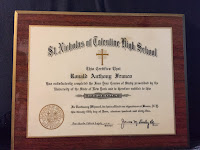 High School may have been for some the happy highpoint of their lives. (I have heard about such people, but honestly I don't think I know any.) For others, it may have been the opposite. For most, it was likely somewhere in between. I, for one, have occasionally expressed the opinion that, if only one could magically just fall asleep for a few years, and then wake up ready to go to college or get a serious job, having missed high school in the process, he or she would have acquired the benefits of living through the high school years without the pain of actually having to experience them!

Certainly high school was not the happiest period of my life! But it was hardly hell on earth either. As with so many life experiences, my memories are more mixed than univocal. And even apparently painful experiences typically seem less so with the passage of time! And, if on the one hand I didn't make too many friends in high school, on the other I did meet my best life-long friend there. I also experienced some teachers who were model priests, who undoubtedly (if indirectly and unknowingly) contributed to my own eventual vocation. So, on this 50th anniversary of my high school graduation, I want to recall some of my better memories of that time and place.

It may not have been the best of times, but it was far from the worst of times. In fact, for many in my parents' and teachers' generation, people who had grown up during the Depression and come to maturity during the Second World War, the early 1960s may well have seemed to them to be the best of times. And some of that contentment - or complacency - certainly rubbed off on us!

While bullying and social stratification were as endemic in high schools then as they probably had always been before then, adolescence was not yet quite so completely cut off from adult culture, and much of what we experienced socially at school and outside of school was, for better or for worse, relatively congruent with the way things were in the wider world. The fact that we were such a relatively small school probably further reinforced that congruence, separating us even less from the wider world.

Most of us had known each other already for years before in grade school (from which, incidentally, I also graduated on this date - exactly 54 years ago). So high school was also in many ways a continuation of and congruent with parish life - at a time and place when the parish was largely identical with the neighborhood, which for most of us most of the time was almost identical with the world.

If it was parochial in the good sense, it was perhaps also a bit parochial in the other sense. Certainly, the education on offer could hardly have compared with New York's famous specialized selective high schools such as Bronx Science or Stuyvesant, or of the famous Jesuit scholarship-only Regis High School. Perhaps the education on offer in those other institutions would have challenged me more effectively, broadened my horizons more, and better prepared me intellectually for City College and Princeton (neither of which were yet anywhere in my sights on graduation day). Who can say? Certainly, however, it was academically as good as what was available in most ordinary high schools at the time, both Catholic and public. And who is to say that I would have been remotely ready yet for the intellectual and emotional challenges those more prestigious high schools might have offered?

In short, like so much of life, it could have been better, but it could have been worse. And the fact that my future almost immediately turned out in some ways so different from what high school seemed to be preparing me for is itself also just part of the mystery of human life in a messy unpredictable world.

But, as I said, it was also parochial in the good sense. It reinforced historic communal values that would continue to form and motivate me - personally and socially, morally and religiously.

I quickly lost contact with most of my high school class and so have only limited information about how they have fared over the years. In recent years (thanks to Facebook), I have managed to reconnect with a few of them. Some, I know, have died, as have several of my teachers and both principals. May they all rest in peace! (Or, as we would have said back then, Requiescant in pace!). I will be offering my Mass today for all my elementary and high school classmates and teachers, living and dead, wherever they may be, and whatever directions their lives may have taken them.