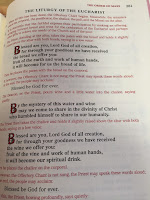 For a while, after the 2011 introduction of the revised translation of the Roman Missal, I regularly recited out loud the two Blessed are you, Lord God of all creation prayers at what (since 1969) is now called the Preparation of the Gifts. This was in order to memorize the new version more quickly and so minimize my chances of lapsing into the earlier language. Previously, I had usually (as the rubrics seem to prefer) said those prayers "in a low voice." Now that I am sufficiently comfortable with the present translation I have reverted to that practice. The two prayers are nice enough but don't really say that much. So there seems little benefit to be derived from overly highlighting them by going with the option of saying them aloud when there is no singing.

The former Offertory prayers of the traditional Roman Rite were perhaps not all that superior - other than the Veni Sanctificator prayer to the Holy Spirit which used to be said between the In spiritu humilitatis (which we still say) and the Lavabo (which was retained, but in an abruptly abridged form). Nor were those prayers all that ancient, having entered into the various medieval sacramentaries rather late in the first millennium. Frankly, I've always found the case for replacing the older Offertory prayers with something simpler to be reasonably persuasive (except again in the case of the Veni Sanctificator), but not so persuasive as to believe that the change we actually got has significantly improved the rite.

All of this, of course, prescinds from the heated ideological arguments on both sides of the debate about the older Offertory vs. the newer Preparation of the Gifts, arguments that are often really more about other issues - such as how explicitly sacrificial the language of the prayers needs to be or how much the prayers need to highlight either the distinct role of the priest celebrant in the sacrifice or the common role of the entire congregation in the sacrifice. To my mind, the Orate Fratres (now once again correctly translated) adequately addresses the latter issue - referring to one sacrifice simultaneously offered by both the priest and the people, while clearly acknowledging that they exercise separate ministries in the one offering (meum ac vestrum sacrificium).

So I was intrigued by the surprising suggestion recently put forward in L'Osservatore Romano by none other than Cardinal Sarah, the Prefect of the Congregation for Divine Worship and the Discipline of the Sacraments:

It would also be desirable that the Penitential Rite and the Offertory of the “usus antiquior” be inserted as an enclosure in the next edition of the Missal with the aim of stressing that the two liturgical reforms illuminate one another, in continuity and with no opposition.

Honestly, I don't really see that happening (although since the prayers in question are all said silently it would have little noticeable effect - and so perhaps could happen). Personally, I think there are already too many options in the the rite and that any changes should be prescriptive. That said, I would be quite content to leave the current prayers in place, but I certainly wouldn't at all mind if they restored the Veni Sanctificator prayer to the Holy Spirit and possibly also (mainly on account of its antiquity) the Suscipe, Santa Trinitas that used to be said between the Lavabo and the Orate, Fratres. That, I think would be more than enough change and would also respond to all but the most ideologically extreme objections to the current  Offertory/Preparation rite.