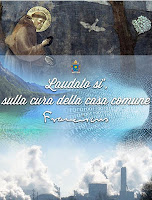 In Laudato Si' Chapter 5, fittingly entitled Lines of Approach and Action, Pope Francis becomes even more overtly prescriptive. In light of the encyclical's analysis so far, he proposes now "to outline the major paths of dialogue which can help us escape the spiral of self-destruction which currently engulfs us" (163). My own sense is that dialogue is generally seen as a soft and, in a context like this, a somewhat invitational word. Clearly, the Pope is not proposing solutions on his own, as if the papal magisterium standing alone offered detailed answers to all complex political, economic, and cultural questions. Obviously, these problems can only be solved by bringing many elements together in common effort, an effort this encyclical clearly proposes to advance, but cannot by itself replace.

First. Francis looks at the "Dialogue" that has been taking place in the international community. He acknowledges he modest advances that have been made, citing specific conferences and international protocols. Still,"Politics and business have been slow to react in a way commensurate with the urgency of the challenges facing our world" and he labels our "postindustrial period" as "one of the most irresponsible in history" (165). He unhesitatingly advocates the progressive replacement of fossil-fuel technology "without delay" (165) and opposes buying and selling "carbon credits" as "a ploy which permits maintaining the excessive consumption of some countries and sectors" (171). The latter seems to reflect his sensitivity to the situation of poorer countries - as does his concern about respecting other states' sovereignty (173).

Turning to the "Dialogue" needed within individuals countries, the Pope challenges "the myopia of power politics." Short-sighted "politics concerned with immediate results, supported by consumerist sectors of the population, is driven to produce short-term growth. In response to electoral interests, governments are reluctant to upset the public with measures which could affect the level of consumption or create risks for foreign investment" (178). And, in a comment that could easily characterize the condition of our own American politics (especially in the wake of Citizens United), the Pope warns: "Unless citizens control political power - national, regional and municipal - it will not be possible to control damage to the environment" (179). "The mindset which leaves no room for sincere concern for the environment is the same mindset which lacks concern for the inclusion fo the most vulnerable members of society" (196).

Secular commentators try to pigeon-hole popes and their pronouncements in the secular categories of liberal vs. conservative (or progressive vs. traditional, etc.)  But such modern, secular political categories inevitably fall far short. Unlike liberals and conservatives, who have their respective political constituencies whose interests they seek to advance, the Church's magisterium is ultimately not based on winning constituents' votes but on proclaiming the Gospel. In classical Catholic political philosophy, economics is understood to be subordinate to politics and both to ethics. The right relation among economics, politics, and ethics is inevitably and inherently foundational dimension of any debate about the environment and indeed any aspect of contemporary public policy.

"Politics must not be subject to the economy, nor should the economy be subject to the dictates of an efficiency-driven paradigm of technocracy. Today, in view of the common good, there is urgent need for politics and economics to enter into a frank dialogue in the service of life, especially human life." For example, the 2008 financial crisis "provided an opportunity to develop a new economy, more attentive to ethical principles, and new ways of regulating speculative financial practices and virtual wealth. But the response to the crisis did not include rethinking the outdated criteria which continue to rule the world" (189).

Given the failure of the political system to respond in a transformational way to the 2008 financial crisis, one can only wonder what it would take to get it to respond adequately to the environmental crisis. "The environment is one of those goods that cannot be adequately safeguarded by market forces" (190).

The overall takeaway from this section of the encyclical is the strong restatement of the principle that "economics without politics cannot be justified" (196), but that our politics today is largely broken by its subservience to interests inimical to the common good and the most vulnerable members of society, which obstructs the enactment of "sound public policies" and bring politics itself into "disrepute" (197).