A World of Grace 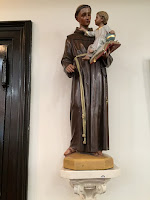 Just the other day, I posted on Facebook some old photos from the 1990s of the annual outdoor Saint Anthony procession at Saint Peter's parish in Toronto, in which I was privileged to participate (carrying the saint's relic) every June for six years (1995-2000) - the first year still as a deacon, and then the rest as a parish priest. Community life in most parishes tends to be punctuated by such repeating annual events, of which at Saint Peter's in Toronto the annual Saint Anthony Italian Festival (festa) was one of the highlights.

Over the centuries, some saints seem to have become particularly popular patrons. In many cases, this has been due to a saint's particularly powerful reputation for working miracles. Saint Anthony (1195-1231) was the first Franciscans to teach as a professor scripture and was called "the Living Ark of the Testament" by Pope Gregory IX. Fittingly, Anthony is also a Doctor of the Church - Doctor Evangelicus ("Evangelical Doctor"). But it is undoubtedly his reputation as miracle-worker that has solidified popular devotion to him. My grandmother, for example, credited Saint Anthony with the safe return of one of her sons who had been serving in the Pacific in World War II. She had a very high opinion of his intercession and believed that he ranked exceptionally high in the heavenly court. Of course, there is no such official ranking that I know of; but popular piety and widespread interest (including popular interest outside the Church) have combined to elevate certain saints above the ordinary rank and file of those already extraordinary figures. In today's Church, there is a kind of brown-robed trinity of particularly popular Franciscan saints - Saint Francis of Assisi, Saint Anthony of Padua, and Saint Pio of Pietrelcina.

In one sense, miracles may appropriately be thought of as extraordinary incursions of the supernatural into our natural world. But taken too far that understanding can become excessively dualistic. For the natural world, we know, is already in some sense oriented toward the supernatural, and nature is intended to be perfected by grace. Miraculous incursions into ordinary experience may be much more common and less dramatic than the necessarily rigorous process for identifying officially documented miracles (e.g., for a beatification or canonization) might suggest.