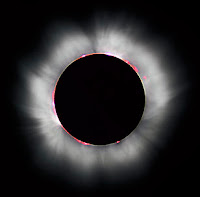 Are we all ready for the “Great American Total Solar Eclipse”? Solar eclipses have fascinated people for all of human history. So it is no surprise that this eclipse is attracting scientists and eclipse tourists to our neighborhood from all over the world, and the US Postal service has even issued a special commemorative stamp!

Historians have long been fond of eclipses, since historical references to ancient eclipses sometimes enable other ancient events to be dated more precisely than would otherwise be possible. One of the earliest known solar eclipses was in 1375 B.C. and was recorded in the ancient city of Ugarit, in what is now Syria. (Syria always seems to be in the news!) In earlier times, eclipses were often interpreted as signs or omens of some contemporary calamity. They have also been known to alter behavior. Thus the ancient Greek historian Herodotus wrote that an eclipse that occurred during a battle between the Medes and the Lydians in 585 B.C. caused the two armies to stop fighting and make peace. Wouldn’t it be something if tomorrow’s eclipse had that kind of effect on any of the conflicts currently tearing our world apart!

What will be the impact of this eclipse on us? How will we experience it? What will we take away from what for most of us will be a once in a lifetime experience?

The Gospels don’t record any eclipses. It was no natural phenomenon, but another person - a foreigner - that challenged Jesus and his disciples in a fundamentally important way in the gospel story we just heard.

Actually, since the story is set in Gentile territory, it was really Jesus and his disciples who were the foreigners there. In this, the event anticipated the reality of the Church, a house of prayer for all peoples, in which we are all in some sense foreigners in the world but no longer foreigners to one another. The perseverance of the Canaanite woman, a descendant of Israel’s ancient enemies, overcame the historical legacy of cultural and religious segregation. Her prayerful persistence shattered Jesus’ silence, and he in turn responded to her great faith.

Hearing this story, the founding generation of Jewish Christians could recognize and celebrate – as we all must - the unique and special mission of God’s Chosen People, Israel, for, as we just heard Saint Paul instruct the Romans, the gifts and call of God are irrevocable. At the same time, generations of Gentile Christians, beginning with those Romans Paul was writing to and continuing generation after generation down to us, must recognize ourselves in the Canaanite woman and her daughter, united by faith in a new People among whom we are all immigrants but may no longer be strangers, segregated from one another.

That was a powerful lesson, a defining and transforming experience for the first generations of the Church, Jews and Gentiles alike. It continues to challenge us as foreigners who join themselves to the Lord to become that house of prayer for all peoples, not as some vague aspirational slogan but as the very heart of the lived reality of what it means to be the Church in a divided and conflicted world.

It is an important reminder that all the identities that divide the human family – such as racial and national identities – are part of our fallen human condition, not part of the natural order as created by God, and that they have been decisively overcome and replaced for Jesus’ disciples by a completely new concept of community, to which we owe our primary allegiance.

Like the many who come from far and wide to experience the awesome wonder of the eclipse, we are all pilgrims seeking the light revealed amid the dark shadows of our day-to-day divisions and conflicts. That light is revealed not in natural phenomena but in the experience we share with the Canaanite woman and her daughter, strangers no longer either to one another or to the Lord who heals and saves us.