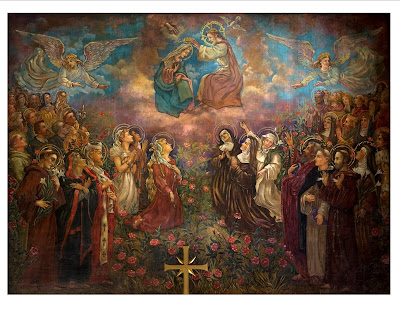 The "Great American Solar Eclipse," which will be the focus of almost everyone's attention today, Fittingly the eclipse comes on the eve of the Church's annual commemoration of Mary as Queen of Heaven and Earth. (Photo: "The Coronation of the Blessed Virgin Mary" at the Paulist "Mother Church" of Saint Paul the Apostle, New York.)

On November 27, 1953, Pope Pius XII's Pontifical Commission for the Reform of the Sacred Liturgy commenced discussion on a proposed new feast of the Queenship of Mary, something which over the course of the previous 20 years had been supported by more than 950 bishops. Apparently the proposal provoked considerable discussion. It was noted that, since the 5th century, Christian art and piety have portrayed Mary as a Queen, and that a liturgical feast would confirm popular sentiment. It would also complement the feast of Christ the King and would present Mary in the context of the fullness of her glory. (The contrary view considered the King-Queen parallelism as problematic, since Mary is not her Son's equal, and also considered Mary's Queenship as already contained in the Assumption and therefore an unnecessary duplication.)

The Commission considered various titles - Regina mundi, Regina coeli et terrae, Regina ecclesiae, Regina universi - finally settling on Festum B.M.V. Reginae. Various dates were considered for the new feast. In the end, the Commission proposed May 1 (although that would necessitate moving Saints Philip and James from their traditional date). On September 8, 1953, in the encyclical Fulgens Corona, Pope Pius XII proclaimed the first-ever "Marian Year" to commemorate the centenary of the dogmatic definition of the Immaculate Conception. Then, during that same "Marian year," on October 11, 1954, another encyclical, Ad Caeli Reginam, proclaimed the Queenship of Mary and assigned the new feast to May 31. Paul VI's post-conciliar reorganization of the Roman Calendar reduced the feast to a "memorial" and transferred it to August 22, the (suppressed) Octave Day of the Assumption.

August 22 had also been considered back in the 1950s. (Pope Pius XII had earlier assigned the feast of the Immaculate Heart of Mary to that date. Paul VI's calendar would likewise lower its rank and reassign it - to the Saturday after the Sacred Heart.) Yet the logic of linking Mary's Queenship to the Assumption seems immensely obvious. It seems to confirm the notion that feast of Mary's Queenship would highlight her ongoing intercessory role in the fullness of her heavenly glory, which, while implicit in the celebration of the Assumption, risks getting under-emphasized in the Assumption's primary emphasis on Mary's bodily glorification. The latter emphasis is important eschatologically. In the daily life of the Church, however, Mary's ongoing intercessory role in the fullness of her heavenly glory is certainly as immediately significant.

Taken up to heaven Mary does not lay aside her salvific duty, but by her constant intercession continued to bring us the gifts of eternal salvation. By her maternal charity, she cares for the brethren of her Son, who still journey on earth surrounded by dangers and difficulties, until they are led into the happiness of their true home. (Lumen Gentium 62)

(For a very brief look at Pope Pius XII proclaiming the Queenship of Mary, go to: https://www.youtube.com/watch?v=q-yNoacJcFg)
Posted by City Father