A Liturgical Lesson from the Eclipse 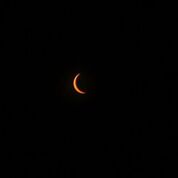 I have said probably everything I have to say about the eclipse (wonderful as that experience was), but there was something in people's behavior - including mine, let me hasten to admit - that is worth commenting on for its relevance to something significant in our liturgical lives, as we experience the dynamic interplay of anticipation and festivity in this society.

I noticed it myself on Monday and even made the same liturgical-cultural analogy. I am sure others did too. Since then, I came across this posting by Bruce Morrill at Pray Tell:, "Watching People Watch (Then Not Watch) the Eclipse: A Liturgical-Theological Reflection."

After describing his experience of the eclipse leading up to and during totality, Morrill writes:

"As I resumed switching between viewing the lunar movement and crescent aura through my glasses and taking them off to view the changing lunar-and-crescent shadows on the ground (utterly beautiful), I noticed people were immediately and then continuously walking away. ... The “after” period offered a precious several more minutes for seeing a crescent expand in the opposite direction. Yet that phase of the event was unable to sustain the attention of but a few. Totality had come and gone, and with it, most people."

I observed the same thing. Indeed, I was part of that. We stayed a short while but quickly got in the car and headed home, hoping to avoid the worst of the traffic. (Since almost everyone else seems to have thought the same thing, it took us 2 and 1/2 hours to drive home.) In the process, some of us immediately recognized the obvious analogy to the contemporary American liturgical dynamic of festivity before and nothing after. Morrill writes:


"The phenomenon aroused a thought about liturgical time-keeping that has been with me now for many years: My fellow Roman Catholics — but also, at least, other “Westerners” who practice the Liturgical Year — annually demonstrate genuine fervor at the beginning of Advent and then Lent’s beginning with Ash Wednesday. Popular or liturgical forms of engagement ensue, to varying degrees, up to the evening of December 24th or Easter Sunday Morning. But then it’s all over, not only for the vast majority (including those who only join the liturgical assembly two days per year) but even for so many of the clergy and regularly attending laity."
If any single cultural phenomenon is to blame for this, then my guess would be that it is the American Christmas (which has now spread all over the world). Christmas in the United States begins on Thanksgiving (and increasingly earlier) and continues with weeks (months?) of shopping and celebrating culminating on December 25, and then it is over. Already on December 26 the first thrown-away Christmas trees can be seen as trash in the street. Catholic churches do typically keep their poinsettias in place another week or more. but this somewhat counter-cultural gesture is less and less coherent not only with what is happening in the society outside but even within the Church, where in many laces the Christmas Octave is increasingly treated not as a major feast but as a time for vacation. Even worse, the obsession with anticipating the feast increasingly sees December 24 becoming the principal celebration, with Christmas Day itself poorly attended.
Easter Sunday morning is probably still the best attended day of the year in most churches. but, as Morrill notes, the notion that Easter stretches on for another seven weeks is increasingly hard to sustain.
Morill makes the
"theological-anthropological observation ,,, that the apparently open-ended, indefinite character of the Paschal Mystery makes the Easter Season (and to its lesser extent, Christmastide) difficult to celebrate vigorously over many weeks. In contrast, Advent and Lent each have such a tangible, timely goal, perhaps a moment of totality, lending themselves to heightened anticipation and countdown-able preparation. .... The (perhaps unsettling) challenge of the Fifty Days of Easter, in contrast to the Forty Days of Lent, is to receive and live them not as a denouement but as a revivifying, empowering, sacramental-ethical eschatology."
That may well be. But the point, of course, of which our behavior after the total eclipse is but one more illustration, is that we seem as a society to have become culturally incapable of sustaining such a sensibility as our liturgical calendar calls for. Our attenuated attention-spans are reflected in our worship in all sorts of ways, not least in this increasing bowdlerization of the annual liturgical cycle of seasons and feasts.
(To read Bruce Morrill's full article at Pray Tell, go to http://www.praytellblog.com/index.php/2017/08/24/watching-people-watch-and-then-not-watch-the-eclipse/)
Posted by City Father