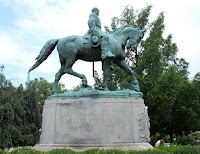 President Obama was famously fond of quoting: "The Arc of the moral universe is long but it bends toward justice." The logic of this slogan is further reflected in secular liberalism's somewhat bizarre preoccupation with always being on something it curiously calls "the right side of history." Sadly, however, history has no "right" side. History just happens. Like human nature itself, our morally imputable, human, historical actions have teleology, but history itself does not. History is just what we do - both good and bad, both right and wrong.

As Jesus said, Watch out that you are not deceived. All sorts of things may happen in history. But the end will not come right away (Cf. Luke 21:8-9).

Secular fantasies about being on "the right side of history" may be one more casualty of the political and moral crisis that has gripped our country. The recent resurgence of publicly celebrated, racist Confederate and neo-Nazi displays, such as was seen in Charlottesvlle last weekend, illustrates the amorality of history's direction. It can go any way - right or wrong. It's really up to us which way it goes. Again, history is what we do. It is we - not some impersonal abstraction called history - that can do right or wrong.

It is neither accidental nor inconsequential that the public celebration of Confederate and neo-Nazi values in Charlottesville last weekend was connected to a present-day controversy about removing a statue of Robert. E. Lee (photo). A disinterested observer would ask the obvious question. What kind of society tolerates statues and other monuments in honor of traitors?

The fact that Robert E. Lee and others were not tried, convicted, and executed for treason (as defined in Article Three of the US Constitution) is past history, with consequences in the present  Contemporary cults that continue to honor them, however, are among those consequences. This is present history and so is as yet unsettled and is for those alive now to settle.

Statues are in themselves simply symbols. But a contemporary generation which witnessed the removal of Communist-era statues after the fall of the Soviet Union understands the potent significance of such symbols - symbols that may portray the past but speak in and to the present. Only when all vestiges of the worst of American history - i.e., of the Confederate fight against the United States in order to preserve and perpetuate slavery - have finally been consigned to the past by people in the present, only then will this nation begin to build not some imaginary utopia on "the right side of history," but the more modest but also more attainable goal of at least a better, more humane, and more just society.

History's only actual arc is the one we set for it by what we do in present history. So let us do the challenging and demanding work of resetting that arc so as to pass on to the future a country that may be - in the words of the so-called "Ephebic Oath" - "not only not less, but greater, better, and more beautiful than it was transmitted to us."
Posted by City Father