A New Kind of Eucharistic Fast 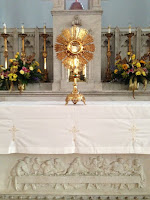 Way back when I received my First Holy Communion on June 4, 1955, we were required to fast completely from all food and drink, except water, from midnight the night before. The exception for water was itself a mitigation only recently introduced in 1953. Soon the eucharistic fast would be more radically mitigated in 1957; and at present it exists only in an even more mitigated, virtually vestigial form.

But now the circumstances of social distance have imposed upon most of the Church a new kind of eucharistic fast - a fast not for the Eucharist but from the Eucharist. It is jarring to our contemporary sacramental sensibilities routinely to celebrate Mass and communicate alone as I must now do. I am reminded of something Thomas Merton wrote in his Journal, on February 11, 1950, “I feel as if my Communion were somehow less perfect when I cannot turn and give the Body of Christ to one of my brothers also.”

In referring to it as "somehow less perfect," Merton was obviously not speaking theologically but experientially, as if in 1950 he were already able to anticipate our contemporary sacramental sensibility., which involves no theological change but reflects an extraordinary experiential change from most of the Church's history when few if any received Communion to today's widespread expectation of almost universal routine reception of Communion.

Whether that particular 20th-century transformation was for the best has been and undoubtedly will continue to be debated. What cannot be debated is the fact that our experience and expectations have changed. Hence the widespread dismay that suddenly so many are not able to receive Communion.

At this stage, we simply have no way of guessing what the long-term consequences of this novel situation will be. Will the absence of Communion make people more appreciative of what they have been missing, as so many fondly hope? Or, as maybe with Mass attendance itself, may many conclude that they didn't miss it that much and so maybe don't really need it after all, as many frankly fear? No one knows. No one can predict.

And might this enforced absence from the Eucharist reset Church life in other ways? Will we revert to a less eucharistic-centered, more pre-20th-century style of Church, something that, for different reasons, is becoming an increasing reality in certain other parts of the world already?

Something so traumatic as what we are experiencing right now is bound to upend all sorts of expectations and make ancient history out of any number of our formerly stable expectations. Indeed, we have recent history as an illustration. Think back to how stable Catholic life was in the United States - parish life especially - in 1960. And then recall how unexpectedly quickly it came apart.  If anything, change happens even faster now than it did then.
Posted by City Father