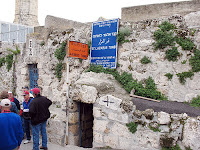 A lot of people all over the world are finding themselves more or less stuck at home these days, due to the necessary restrictions imposed on us by the present pandemic. That's obviously not so bad as being dead and in a tomb for four days as Lazarus was, but many might still wish someone would say to them what Jesus said to Lazarus: "Lazarus come out!"


Until relatively recently, this 5th Sunday of Lent was called “Passion Sunday.” With just 2 weeks to go till Easter, today marks the beginning of Lent’s final phase, as the Church focuses our attention more and more on the final events of Jesus’ earthly life – and why those events matter for us today.

The gospel we just heard recounts the last miracle of Jesus’ public life – miracles which John’s Gospel calls “signs” because they serve to reveal Jesus and invite us to respond to him with faith. But Jesus’ raising his friend Lazarus from the dead also led to the authorities’ decision to have Jesus executed. So life and death are mixed together in this story – as the same event that suggests the new life Jesus makes possible for us also results (on the part of his enemies) in a decision for death.

Since ancient times, this Gospel has been especially associated with the Lenten experiences of catechumens and penitents preparing to be baptized or reconciled at Easter, a renewal we are all invited to identify ourselves with. The apostle Thomas’s somewhat surprising exclamation, “Let us also go to die with him,” is actually addressed to us, as the Church invites us to accompany Jesus in his final journey - and to trust the risen Lord to raise us to beyond whatever confines us at present to a fuller life in his kingdom.

In the Gospel story, the friendship shared by Jesus and Lazarus extended also to his sisters, Martha and Mary, who first notified him that Lazarus was sick. Strangely, however, he seemed to ignore their message, thus setting the stage for this great miracle, and also for the famous conversation with Martha, which for so many centuries has been read at Catholic funerals.

Jesus’ surprising answer to Martha, I am the resurrection and the life, was intended to hint ahead to his own unique experience of resurrection – something neither Martha nor anyone else would have understood at the time, since no one was then expecting the Messiah (nor, for that matter, anyone else) to rise from the dead, all by himself, ahead of everyone else. We, however, start from the fundamental fact that Jesus has risen from the dead, and then we understand his death - and his whole life - in the light of that.

Unlike Jesus, Lazarus came out of the tomb to resume his ordinary life (and then to die again eventually).  Jesus, however, would rise out of his tomb in order to live forever. No one would either have to help him to come out or have to untie him. The resurrected life of the Risen Christ is something altogether new and different and means death’s decisive defeat. Meanwhile, however, in this in-between time which we still live in, bystanders had to take away the stone for Lazarus to come out, and he emerged still confined, bound hand and foot, needing others to untie him.

We are all, in some sense, confined like Lazarus. But we are also called to do like the bystanders and help one another to find our way from the darkness to God’s kingdom, helping one another along the way, untying whatever blocks us.

John’s Gospel goes on to tell how, as a result of this event, the political leadership decided to kill Jesus - and to eliminate the evidence by killing Lazarus too. Martha’s invitation to Mary, The teacher is here and is asking for you, is addressed to all of us, who are in turn invited to address it to one another - and to this world which so desperately needs to hear it, but which increasingly seems somewhat dead to hope.


After experiencing what Jesus had done for Lazarus, many believed in him, but others went to report him to his enemies. Jesus’ own resurrection, of which this was meant as a hint, likewise challenges each of us to respond - one way or the other.