In Time of Pestilence 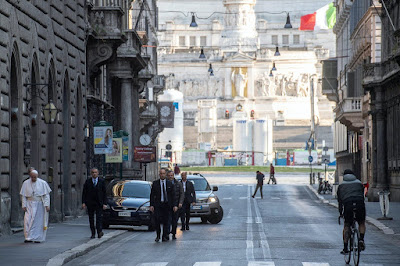 In the old days, there was a Votive Mass Pro Vitanda Mortalitate. So far as I can tell, it no longer appears in our contemporary Missal, but we could surely use it today!

I have been encouraging everyone to pray Pope Francis' Prayer to Our Lady Health of the Sick and Salvation of the Roman People. The famous image of Mary, Salvation of the Roman People in the papal Basilica of Saint Mary Major was particularly dear to Isaac Hecker and is particularly dear to Pope Francis, who visits it often and visited it again on Sunday afternoon (Photo at bottom).

From there, his pilgrimage continued to the church of San Marcello al Corso. The above photo shows him walking the last segment of that pilgrimage on foot on what is normally one of Rome's busiest streets. It is quite a sight! And it is a poignant reminder that one of the consequences of this crisis is social separation. That is why I think it is especially important that we all try to keep in touch with as many people as we can - especially those who may be lonely or particularly frightened. Loneliness and fear are also deadly.

The original church of San Marcello al Corso burned down in 1519, but its large wooden crucifix somehow survived undamaged. During a plague in Rome in August 1522, a two-week procession took place during which the great crucifix was carried from San Marcello to Saint Peter's through all the districts of the city. (This is a photo of the San Marcello Plague Crucifix, which I took in 2012.) 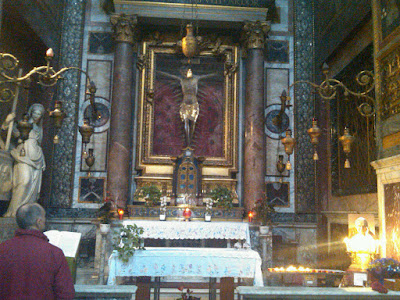 And here is Pope Francis' Prayer to Mary, Health of the Sick and Salvation of the Roman People:

O Mary, you shine continuously on our journey as a sign of salvation and hope.
We entrust ourselves to you, Health of the Sick.
At the foot of the Cross you participated in Jesus’ pain,
with steadfast faith.
You, Salvation of the Roman People, know what we need.
We are certain that you will provide, so that,
as you did at Cana of Galilee,
joy and feasting might return after this moment of trial.
Help us, Mother of Divine Love,
to conform ourselves to the Father’s will
and to do what Jesus tells us:
He who took our sufferings upon Himself, and bore our sorrows to bring us,
through the Cross, to the joy of the Resurrection. Amen.
We seek refuge under your protection, O Holy Mother of God.
Do not despise our pleas – we who are put to the test – and deliver us from every danger,
O glorious and blessed Virgin. 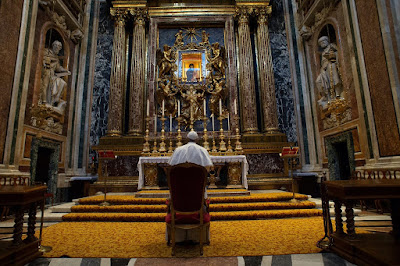