The Lent We Have Lost: The Seven Penitential Psalms 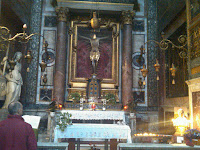 In this terrifying time of viral pestilence, I have particularly recommended to people Pope Francis' beautiful prayer to Our Lady, Health of the Sick and Salvation of the Roman People. In addition, however, there are also older practices that had long been a part of the Church's tradition, especially in this Lenten season, that may have more recently been forgotten  but which we might profitably retrieve at this time. One such tradition is the praying of the Seven Penitential Psalms and the Litany of the Saints.

The preeminent penitential psalm is, of course, the Miserere (Psalm 51), which for many centuries used to be a regular component of the Church's Morning Prayer (Lauds) on weekdays - and still is at least on Fridays in the contemporary Roman rite. Early in the Church's history, Cassiodorus (c.485-585) composed a famous work on the Psalms, which listed seven "penitential" psalms:  6, 32, 38, 51, 102, 130, and 143 (in our common contemporary numbering):. So the category was familiar and already traditional by at least then. Like the Litany of the Saints, the "Seven Penitential Psalms" eventually became a common component of many liturgical rites, among them the Dedication of a Church, and were commonly added after Matins and Lauds on penitential days (e.g., in Lent). The burden of these many additions is usually thought to be one of the reasons why festive offices proliferated, even in Lent, since the extra psalms and litany would not have to be prayed on feast days. Presumably it was for this reason - to make the weekday Office more attractive and to ease the burden on those with pastoral responsibilities - that Pope Saint Pius X's reform in 1911 abolished most such extra obligations.

Contemporary "social distancing" obviously precludes old-fashioned penitential processions, like the famous 1622 procession with the "Plague Crucifix" that I referred to yesterday. But with modern media the texts are easy for anyone to access on one's own, and they remain an especially appropriate vehicle for personal prayer especially in this cataclysmic Lenten season.

One particularly useful resource is the USCCB's website where one can listen to each of the "Seven Penitential Psalms" as well as read a Reflection for each.  (For this, go to:
http://www.usccb.org/prayer-and-worship/liturgical-year/lent/seven-penitential-psalms-songs-of-suffering-servant.cfm