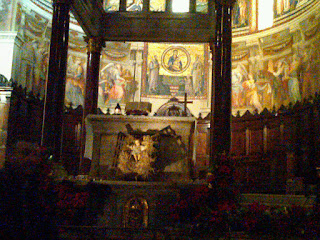 The popular carol stops at the 12th day, but today is actually the 40th day of Christmas.

In Catholic countries, it is a common custom for the nativity scene to remain in its place in churches until today. So nine years ago at this time, when I was studying at "saints' school" in Rome, I enjoyed almost a full month in which to visit the various presepe, which were on display in Rome’s many churches.

In the western, Latin Church, today is currently called the Presentation of the Lord, although for several centuries it was also known as the Purification of the Blessed Virgin Mary. According to the Gospel (Luke 2:22-40), Mary and Joseph took the child Jesus to Jerusalem according to the law of Moses in order to observe two important religious obligations. The first was the ordinary obligation in that society to be purified after childbirth, reflecting ancient beliefs about the sacredness of blood, and the requirement of ritual purification after any direct contact with blood. The second concerned the special status and religious responsibilities of a first-born son (because of God’s having spared Israel’s first-born at the time of the Exodus from Egypt).

But, whatever the official title, a common popular title for today’s celebration in the West has long been Candlemas Day, because of the Blessing of Candles and the Procession - originally in Rome an early morning, pre-dawn procession, somewhat penitential in character – with which today’s Mass begins. This replaced an earlier pre-Christian Roman pagan custom. According to the medieval traditions recounted in The Golden Legend: "On the calends of February the Romans honored Februa the mother of Mars the god of war, by lighting the city with candles and torches throughout the night of that day. ... Since it is hard to relinquish such customs and the Christians, converted from paganism, had difficulty giving them up, Pope Sergius transmuted them, decreeing that the faithful should honor the hold mother of the Lord on this day by lighting up the whole world with lamps and candles."

The name Candlemas calls attention, obviously, to the blessed candles, but also to their light – and to Jesus the One whom that light symbolizes. The Ceremonial of Bishops says that “on this day Christ’s faithful people, with candles in their hands, go out to meet the Lord and to acclaim him with Simeon, who recognized Christ as ‘a light to reveal God to the nations.’ They should therefore be taught to walk as children of the light in their entire way of life, because they have a duty to show the light of Christ to all by acting in the works that they do as lighted lamps.”

A secular version of Candlemas is “Groundhog Day.” Even those who may never ever even have heard of Candlemas can recognize the folklore that connects this day with the change of seasons. While the weather is still decidedly wintry, the days are noticeably getting longer. Whereas Christmas comes at the mid-point of the winter’s darkness, with the year’s shortest day and its correspondingly longest night, Candlemas comes at the mid-point between the winter solstice and the spring equinox, the transition (according to one ancient way of reckoning the seasons) from winter to spring. Soon, day and night, light and dark will be equal. So this last of the great winter light festivals invites us to look ahead to what these ancient seasonal feasts are meant to symbolize.

Today we recall with joy the Lord’s entry into his Temple: and suddenly there will come to the temple the Lord whom you seek (Malachi 3:1-4). At the same time in Luke's Gospel, we hear wise old Simeon’s words to Mary, the first reference to what lies ahead, the first reference to the cross. Behold, this child is destined … to be a sign that will be contradicted – and you yourself a sword will pierce – so that the thoughts of many hearts may be revealed.

So, even as we take one last look back at winter and Christmas, Candlemas looks ahead to spring and Lent, and reminds us that the point of Christmas is Easter. Meanwhile, Simeon and Anna’s encounter with the infant Jesus in the Jerusalem Temple points us toward our own encounter with the Risen Christ here and now.

In the Eastern, non-Latin Churches, this day is called the Encounter, the Feast of Meeting. Today, Christ comes to meet us, and we in turn get to meet him. Every Christmas we encounter Christ in a special way in the image the infant Jesus in the manger. When we encounter the infant Jesus in the nativity scene in church and at home, we appreciate anew the great mystery of the incarnation of God’s Son. When Simeon and Anna experienced in the infant Jesus the human face of God, they spoke about the child to all who were awaiting the redemption of Jerusalem. They hastened to proclaim and share their good news. That remains our task today – to take the light of those blessed candles out into our spiritually still so very dark world, and so to share with all the light reflected in our own lives from the brightness of the human face of God