The Puritan Origins of American Patriotism (The Book) 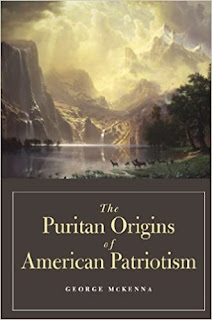 One of the side benefits of my enforced idleness has been the opportunity to read or re-read some wonderful books - among them, my undergraduate American Political Thought professor George McKenna's monumental exploration of New England Puritanism and the long-term impact of Puritan beliefs and sense of mission through our national history down to the present, The Puritan Origins of American Patriotism (Yale, 2007).

The intricacies of Puritan theology and the factional disputes they produced (for example, the differences between "Spiritists" and Preparationists" and between "premillenialism" and "postmillenialism") are, well, intricate. McKenna both elucidates and explains these intricate distinctions and also highlights how they have mattered and may continue to matter throughout American history. It is one of the commonplaces of American history that so much of American political thought has been a variant of or a reaction against Puritan sensibilities. McKenna clarifies what that means and why it is important.

There is, of course the contrary commonplace that the Founders were secular-minded Deists, who had left religion behind, in a society which was severely unchurched. On the contrary, McKenna argues that "at least 60 percent of the adult white population attended church regularly between 1700 and 1776," that Deism was much less pervasive in the founding generation that is commonly alleged, that "the Christian revivalist George Whitfield was more widely known and respected than Franklin," and that what the Founders wanted was not the suspect notion of separation of church and state but rather "religious liberty, freedom from religious discrimination, and an end to religious 'establishments'."

McKenna takes us through the Great Awakening, the second Great Awakening, the  impact of Methodism, and the unique character of "politically sterile" Southern evangelicalism, and the continues the trajectory through subsequent American history, including the whigs, Lincoln, the Civil War, the Gilded Age, the Progressive era, the Scopes trial, Reinhold Niebuhr's emphasis on original sin, the New Deal and World War II, the fifties and sixties, and ending in the aftermath of 9/11.

He also highlights the strong strain of anti-Catholicism in mainstream American religious and political thought throughout that history, how (contrary to the historically surprising current situation) "historically American patriotism and American anti-Catholicism are joined at the root." He demonstrates how for much of American history, Catholics and Southerners were the outsiders in terms of the American consensus.

Interestingly, he also argues that "anti-Catholicism seems to coincide with periods of national torpor and self-doubt, and it fades once America recovers its sense of mission. Anti-Catholicism almost disappeared during the American Revolution, when Americans finally knew what they were about. It came back during the anxious antebellum years, but retreated once the North began its crusade 'to make men free'." Thus, while some in FDR's administration "still retained old Whiggish anti-Catholic prejudices, the Roosevelt Administration's public face was "Catholiphilic."

McKenna also studies how, in the aftermath of World War II, Catholicism itself became (borrowing Mark Silk's typology) an American "adhesional" religion, dramatically so in the thought of John Courtney Murray, who "was saying that, of all the religions in America, Catholicism is the most faithful to America's moral foundations." The story ends with that most paradoxical product (which I would also characterize as a morally and politically poisonous product), the contemporary alliance between conservative Catholicism and evangelical Protestantism, who have come together in affirming "the older story of America as a land with a providential mission to provide opportunity for all and to carry its gospel to the rest of the world."

The shrunken aspirational character of that alliance today, its abandonment of both "opportunity for all" and carrying "its gospel to the rest of the world," raises questions about fundamental changes in our society, which this sort of analysis needs to address, but which are beyond the scope of this book's narrative, which ends over a decade ago.