He "helped her up" 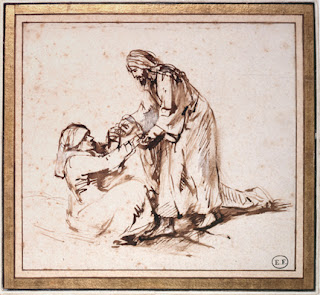 Some Thoughts on this 5th Sunday in Ordinary Time, February 7, 2021.

For almost a year now, the entire world’s attention has been captured by the covid pandemic, which has upended all our lives in ways we had never expected. Now, with the successful development of various vaccines, we are all hoping to see, sometime soon, the light at the end of the proverbial tunnel. But what a tunnel it has been! It is a tunnel which still divides us along political lines, where whether or not to take proper precautions, like mask-wearing and social distance, is seen as an expression of one's political allegiance! And the much sought for solution, the vaccine, itself risks dividing us again along class and other lines, causing fellow citizens to compete rather than row together through this storm. However much we may want to say that we are all in this together, in fact this pandemic has over and over again revealed the divisions and fault lines in our society. As Pope Francis has written: "For all our hyper-connectivity, we witnessed a fragmentation that made it more difficult to resolve problems that affect us all" (Fratelli Tutti 7).

That said, sickness remains certainly one of the more universal human experiences. While some may get to go through life luckily blessed by generally better health than others, few get to escape any sickness at all. And even the many who have been somehow spared infection by the present plague have nonetheless lived for almost a year in a constant state of anxiety about the possibility of infection - months of misery ... filled with restlessness (Job 7:3-4).
As Job's sad story reminds us, in illness we experience how powerless we really are, how limited our control; and, like Job, we may feel discourage, angry, and fearful, that I shall not see happiness again (Job 7:7).
Judging from this Sunday’s Gospel (Mark 1:29-39), Jesus spent a lot of his time curing the sick, liberating people from the various physical and spiritual disabilities that had hitherto overpowered them. That seems to be why and how his reputation spread.
So, when Jesus entered Simon and Andrew’s house and heard that Simon’s mother-in-law lay sick with a fever, Jesus grasped her by the hand and helped her up – a scene so encouraging that it could have lifted even Job out of his depression! In doing this, by healing the sick, Jesus was revealing his Father to us – demonstrating God’s care for us. The Gospel says he grasped her by the hand. Touching is one of those things people tend to be especially squeamish about with the sick - something we have deliberately shied away from, individually and as a society, thanks to this pandemic, something we may now be missing more than we know.
But Jesus often touched the people he healed, even when he risked ritual impurity by doing so. With that one simple gesture, Jesus joined himself with the sick and suffering who were stuck at the margins of normal social activity. In so doing, he summarized the story of his life, his mission to become one with us and so to empower us to get up and live that fuller life God really wants us to live.
Good news travels fast. Soon, the whole town was gathered at the door. And so it has been ever since as the Church continues Christ’s life and mission in our world – caring for the sick and accompanying them with the Church’s prayer.
The same God who cares enough to touch us, by becoming one of us in his Son, continues to bring us together in the same struggle against suffering. Yes, sickness separates people - straining, limiting, even destroying normal social activities and relationships. In Jesus’ presence, however, the healthy were drawn to become part of the healing process. In the gospel story, the first thing the disciples did was to tell Jesus about Simon’s mother-in-law, to involve him in her situation. Later on, when other sick people were brought to Jesus, they didn’t come alone. The whole town brought them.
This Thursday, February 11, we will celebrate the festival of Our lady of Lourdes. More maybe than any other single site, Lourdes is known as one of those special places to which pilgrims have come from all over the world to seek physical and spiritual healing.  I have been there several times and have always been inspired to witness the compassionate and loving way in which the sick are welcomed and enabled to participate in all the various activities there. Since 1997, February 11 has been observed as the Church’s annual World Day of the Sick – so designated by Saint John Paul II as “a special time of prayer and sharing, of offering one’s suffering for the good of the Church and of reminding us to see in our sick brother and sister the face of Christ who, by suffering, dying, and rising, achieved the salvation of the human race.”
This year, in this pandemic-ravaged world, the annual world Day of the Sick speaks to us even more urgently of the solidarity sickness always attacks and which this pandemic in particular has attacked - and of the resulting imperative, illustrated in Jesus' own actions, to recover that solidarity as a society.
In his invocation at the Inauguration Eve Covid Memorial service on the National Mall in Washington, D.C., Cardinal Wilton Gregory said it so well: “Our sorrow unites us to one another as a single people with compassionate hearts. May our prayer strengthen our awareness of our common humanity.”
Photo: Rembrandt van Rijn (1609–1669), The Healing of the Mother-in-Law of Saint Peter(late 1650s).
Posted by City Father