From Desert to Mountaintop 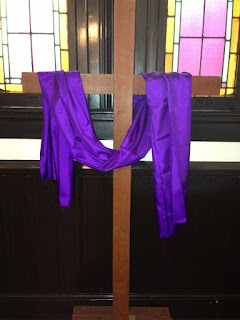 Last week, we followed Jesus into the desert. For some, the desert has become the archetypal image for Lent, perhaps especially in this time of pandemic when we so frequently feel ourselves to be isolated -  in a social if not physical desert. Today however, we leave the desert behind for a while and follow Jesus up a mountain, all the way to the summit. Mountain-tops too are generally isolated places. Nowadays, experiences of religious renewal are often popularly marketed as "desert experiences." but they can also be portrayed - and sometimes are - as "mountain-top experiences" in our ongoing climb to that spiritual summit which is our lifelong goal.

Today’s Gospel describes the quite literally mountain-top experience of Peter, James, and John on Galilee’s Mount Tabor. An ancient tradition dated the Transfiguration 40 days before the Crucifixion, which is one reason why, every year, the Transfiguration Gospel is read early in Lent.

Today’s liturgy, however, recalls not just one, but two mountain-top experiences, and it is Abraham’s (and Isaac’s) experience on Mount Moriah, recounted in today’s first reading from Genesis, that is maybe even more famous. All three religions that trace themselves to Abraham ascribe special significance and give great prominence to that event.

Judaism identifies Mount Moriah with the Temple Mount in Jerusalem. In synagogue, this story is read annually on the second day of Rosh Hashanah, the Jewish “New Year” festival in the fall of each year.  Muslims (who believe God's command was to sacrifice Abraham’s older son Ishmael rather than Isaac) commemorate it on the Feast of Sacrifice (Eid al-Adha), which occurs annually during the pilgrimage (Hajj) season.

Christians have traditionally identified Mount Moriah either with the Temple Mount (as Jews do) or with the nearby site of Christ’s crucifixion. For Christians, this story foreshadows God the Father’s sacrifice of his Son and Jesus’ obedient submission to his Father’s will - a connection alluded to in today’s second reading, from Saint Paul’s letter to the Romans, in reference to God who did not spare his own Son Christ Jesus who died and was raised.

Common to all is an emphasis on Abraham’s faith in God, who, as the narrator tells us at the beginning of the story, put Abraham to the test. Of course we know how the story ends, but Abraham didn’t, and that is the point.

Years before, God had commanded Abraham to move to a strange land, armed only with God’s promise to bless him with descendants as countless as the stars of the sky and the sands of the seashore. In his very old age, Abraham had finally been blessed with the first installment of God’s promise – his son Isaac, on whom would depend Abraham’s hope for the fulfillment of the rest of God’s promises. When Isaac was eight days old, Abraham had circumcised him as a sign of God’s promise and as a link to future promised generations.

Now, however, Abraham confronted what surely must have been his worst nightmare – the extinction of his line: “Take your son Isaac whom you love and offer him up.” Abraham experienced what everyone who has ever loved anyone learns, that love always carries with it the real possibility of heartbreak.

But what choice did he have? For years, he had trusted God to deliver on his promise. To disobey God’s command now would be to deny his own past, his whole history, and thus just as surely to forfeit his future (which is what inevitably happens whenever we deny our past).

The excerpt read at Mass today skips the part of the story, where Abraham evasively answered Isaac’s question about what they were going to sacrifice. Abraham could not know that God was going to spare Isaac at the last minute. But he was convinced that somehow God would keep his promise. He understood that, whatever the future might hold, he could only have access to it by remaining faithful to his past – to God who chose him and whom Abraham had chosen in return. As the letter to the Hebrews puts it: By faith Abraham, when put to the test, offered up Isaac, and he who had received the promises was ready to offer his only son, of whom it was said, “through Isaac descendants shall bear your name.” He reasoned that God was able to raise even from the dead, and he received Isaac back as a symbol [Hebrews 11:17-19].

In most depictions of this event, Isaac tends to be portrayed as a boy. However, the 1st century Jewish historian Josephus thought Isaac was 25 and the Talmud teaches that he was 37. If Isaac was a grown man, strong enough to prevent Abraham from tying him down, then his non-resistance makes him an even more effective symbol for his greatest descendant Jesus, who would offer himself in sacrifice in fulfillment of his Father’s will.

Not for nothing does the Roman Canon call Abraham our father in faith. He didn’t know precisely what would happen when he reached the mountain-top. But he did know that a relationship with God is based on trust and that, whatever else happens, the one thing we have to keep on doing is to keep on trusting. He had, what the great 18th-century spiritual writer Jean-Pierre de Caussade called the certitude of faith tinged with hope.

The binding power of any relationship is measured by its sacrificial seriousness, the depth of one’s commitment and of one’s willingness to answer, like Abraham, “Here, I am.”  We are able to do that, not just because of Abraham and Isaac’s example, but because we have come to know and have experienced the ultimate keeper of God’s promise - Abraham and Isaac’s greatest descendant, Jesus, who said “Here, I am” to his Father and so was called the beloved Son, the one and only Savior of the world, to whom we (with Peter, James, and John, and all the Church - past, present, and future - here and everywhere) are now being commanded to listen.