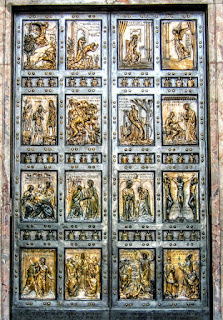 Now, as the first twenty-five years of the new century draw to a close, we are called to enter into a season of preparation that can enable the Christian people to experience the Holy Year in all its pastoral richness.

The history of Holy Years has gone from the seemingly spontaneous first Jubilee Year of 1300 to the intensely and publicly prepared for "Great Jubilee" to mark the turn of the millennium in 2000. In recent centuries, these "Jubilees" or "Holy Years" have generally been celebrated at 25-year intervals. Revolutionary politics prevented the Jubilees of 1800 and 1850, and the Italian occupation of Rome resulted in a very toned-down 1875 Jubilee in which the Holy Doors remained closed. Twentieth-century Holy Years grew progressively more elaborate, culminating in the "Great Jubilee" of 2000, during which I was one of the millions privileged to travel to Rome, passing through each of the Holy Doors as a Holy-Year pilgrim.

Inexorably, the calendar keeps advancing, and soon it will be time for another such celebration. On January 3, Pope Francis approved the official motto, Pilgrims of Hope, for Holy Year 2025. Then, this past Friday, on the feast of Our Lady of Lourdes, Pope Francis elaborated further on the upcoming Jubilee in an official Letter to the President of the Pontifical Council for the Promotion of the New Evangelization, quoted above at the top of this post.

Unlike the "Great Jubilee" of 2000, which occurred at a period of relative optimism, the forthcoming Holy Year will be celebrated under significantly different circumstances, for both the Church and the world. The Pope obviously recognizes this and acknowledged it in his Letter:

In the last two years, not a single country has been unaffected by the sudden outbreak of an epidemic that made us experience first-hand not only the tragedy of dying alone, but also the uncertainty and fleetingness of existence, and in doing so, has changed our very way of life. Together with all our brothers and sisters, we Christians endured those hardships and limitations. Our churches remained closed, as did our schools, factories, offices, shops, and venues for recreation.  All of us saw certain freedoms curtailed, while the pandemic generated feelings not only of grief, but also, at times, of doubt, fear and disorientation. The scientific community quickly developed an initial remedy that is gradually permitting us to resume our daily lives. We are fully confident that the epidemic will be overcome and that the world will return to its usual pattern of personal relationships and social life. This will happen more readily to the extent that we can demonstrate effective solidarity, so that our neighbors most in need will not be neglected, and that everyone can have access to scientific breakthroughs and the necessary medicines.

It is precisely in order to contribute greatly to restoring a climate of hope and trust as a prelude to the renewal and rebirth that we so urgently desire, Pope Francis writes that he chose Pilgrims of Hope as the Jubilee's motto.

Detailed directions about the preparation for the Holy Year will presumably be forthcoming. Meanwhile, Pope Francis is inviting the church to devote 2024, the year preceding the Jubilee event, to a great “symphony” of prayer.  Prayer, above all else, to renew our desire to be in the presence of the Lord, to listen to him and to adore him. Prayer, moreover, to thank God for the many gifts of his love for us and to praise his work in creation, which summons everyone to respect it and to take concrete and responsible steps to protect it. Prayer as the expression of a single “heart and soul” (cf. Acts 4:32), which then translates into solidarity and the sharing of our daily bread. Prayer that makes it possible for every man and woman in this world to turn to the one God and to reveal to him what lies hidden in the depths of their heart. Prayer as the royal road to holiness, which enables us to be contemplative even in the midst of activity. In a word, may it be an intense year of prayer in which hearts are opened to receive the outpouring of God’s grace and to make the “Our Father,” the prayer Jesus taught us, the life programme of each of his disciples.

A great “symphony” of prayer  sounds like a good way to fill in the time between the frenzy of activity of the synodal process and the Jubilee. It also, I suspect, expresses even better than the synodal process what may be most needed as we recover from and emerge from the period of pandemic to face the challengingly uncertain future that likely lies ahead.